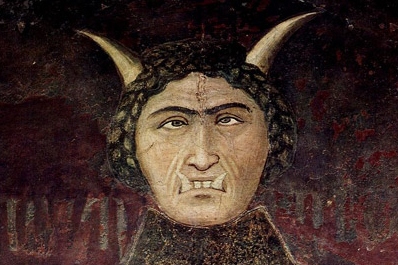 I know that most of you are waiting for me to sneak in a haymaker of a reproach about the present political reality in the United States. But as I wrote in the opening line of this blog series, the beauty of this particular fresco cycle is that I do not have to get reproachful – the paintings do it for and better than me.

Ambrogio Lorenzetti’s Allegory and Consequences of Bad Government is the frighteningly poignant “mirror, mirror on the wall” of any society that has lost its sense of values, moral dignity and honor.

Bad Government (see above) depicts a visual ensemble of vices that is diametrical to the Allegory of Good Government discussed in my earlier blog. In Bad Government, the three theological virtues have been replaced by the three supreme vices hovering at the top of the painting (see below). From left to right, the older female figure in grey with the money-bag yolk in her hands personifies Avaritia or “Avarice”; the central female figure in red, with empty yolk and gripping a sword represents the greatest sin of all – Superbia, or “Pride”; and finally, the female figure in brown and red to the right with a Revlon® mirror in her hand, who simply cannot take her eyes off of herself represents Vanagloria or “vainglory” or “vanity”.

These consummate vices hover above the diabolical, horned and fanged figure who sits in the central place of honor and who represents Tyrannide, or “tyranny”. (see below) Tyranny supplants the “Commune” figure that we saw in Good Government and holds a poisonous hemlock flower in his right hand and is tweeting with his left hand… oops, Freudian slip. What I meant to say is that he is holding a chalice with which to serve his tyrannical venom in his left hand. At Tyranny’s feet, instead of the noble she-wolf and suckling twins, we find a horned goat, which is the traditional symbol of the devil.

Flanking the figure of Tyranny on either side is his cabinet of earthly vices (at least he has one…). Starting on the far left (see below), we have the personification of Crudelitas, or “cruelty”, who is represented as a female torturing an infant with a serpent… I’d say that that’s pretty cruel. Next to Cruelty sits Proditio, or “treason”, represented as a man holding a hybrid animal with the front half of a lamb and the rear end of a scorpion. Like all traitors, it seduces with innocence, only to fatally strike when least expected. Next to Treason sits Fraus, or “fraud”, represented as a figure who, from a distance, appears to be an attractive woman, but close up reveals a masculine beard, bat wings, and sharp claws.

To the right side of Tyranny sit three more earthly vices (see below). The first is represented as an odd hybrid animal – half horse, half wild boar – and identified as Furor or “fury”. That anger causes us to lose our human reason and rational and devolve into baser creatures and, therefore, that statesmen should not make impetuous decisions and/or statements in anger (cough, cough). Next to Fury sits the vice that perhaps most afflicts our own contemporary political reality – Divisio, or “Division”. She is personified as a female figure whose gown is divided vertically into white and black halves, with the word “si” in the white half and “no” in the black. She holds a saw and is actively cutting herself in half!

I’m not sure if Honest Abe ever made it to Siena, but there is a dumbfounding resonance with one of his better-known speeches delivered some five centuries later: “A house divided itself, cannot stand…I believe this government cannot endure …It will become all one thing or all the other”.

To the right of Division sits Guerra or “war”, personified as a figure armed with shield and drawing a sword.

And remember our friend Justice and the prominent role that she played in Good Government? Well, in Bad Government, she has been straight-jacketed, restrained and suppressed, one might even say “obstructed”, at the feet of Tyranny. Justice is clearly identifiable as the word Iustitia (now damaged) is written behind her. (see below) Today, there might be a “Department of” written just before….

So just what are the frightening consequences of a such and immoral and incompetent government? Lorenzetti illustrates them in the adjacent scene (see below).

In the lower right-hand corner of the Consequences of Bad Government there is a woman in a red dress being manhandled. Some have interpreted this as an act as a rape. Others instead as an arrest as the scarlet dress might identify the woman as a prostitute. One of my former students astutely noted how similar this female figure appears to the young maiden riding off to marriage in the Consequences of Good Government, further emphasizing how individuals suffer the consequences of political injustice. Regardless of what is happening to the woman, there is a dead person lying on the ground below her – and that can’t be good. To the left, two men, who seem to be wearing their pajamas, appear to be robbing a third in broad daylight. Without Justice, there is no one or thing to protect the weak.

And if there was construction in Good Government, we have, instead, destruction with Bad Government (see above). The city is literally falling apart. Economic prosperity is now limited only to the weapons maker in the arch to the left, as the only people who dare hazard a trip into the post-apocalyptic wasteland of the countryside are soldiers armed to the teeth. (see below). It is now the rule of the mightiest, not of justice, that governs the land as evidenced by the winged figure of Timor, or “fear”, that has replaced Securitas in the countryside.

Geez, and we thought socialism was scary….

Judge Diligently (or At Least Not Idiotically) Ye Who Rule the Earth!!!

My Kingdom for a Horse...that can win the Palio!!!!