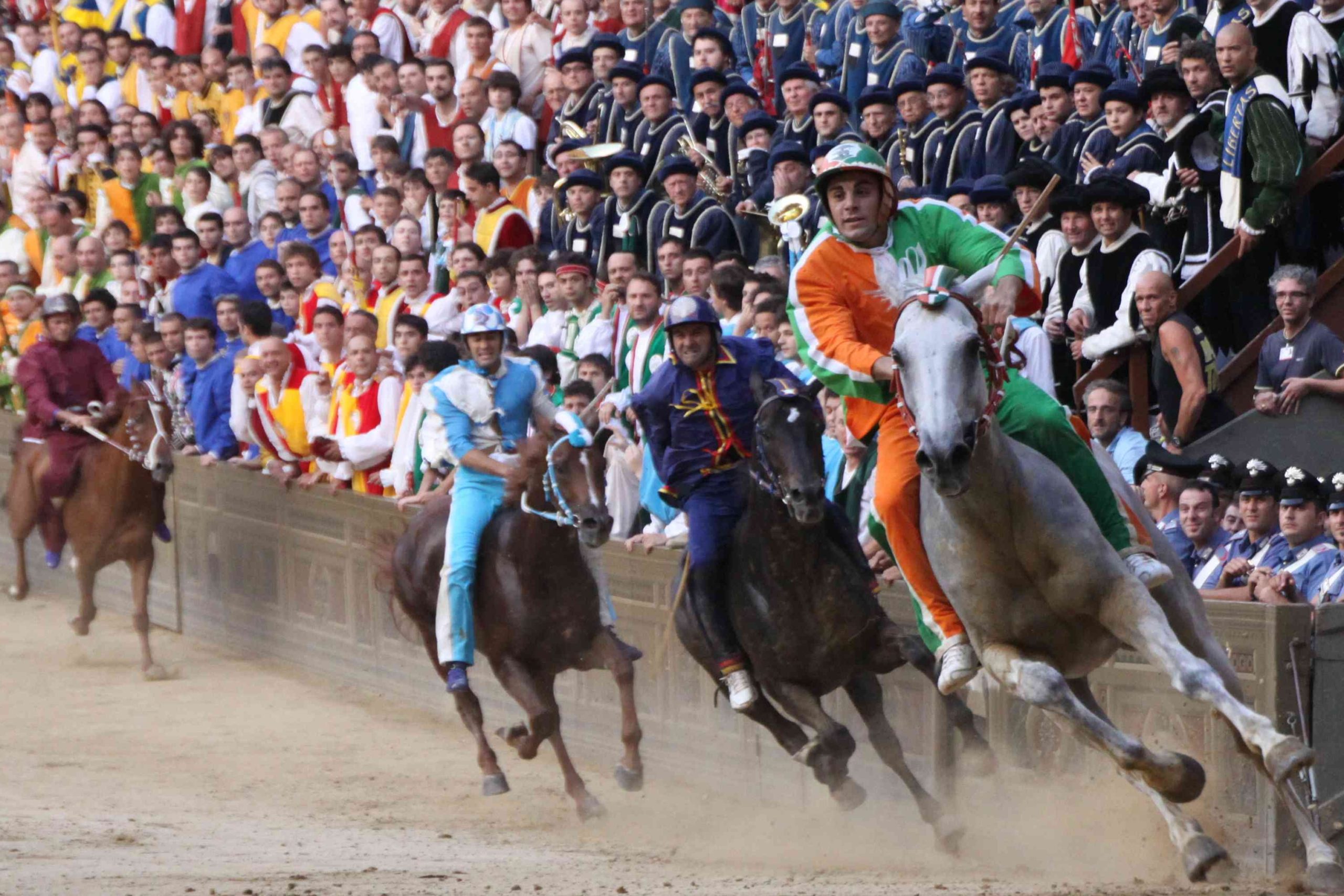 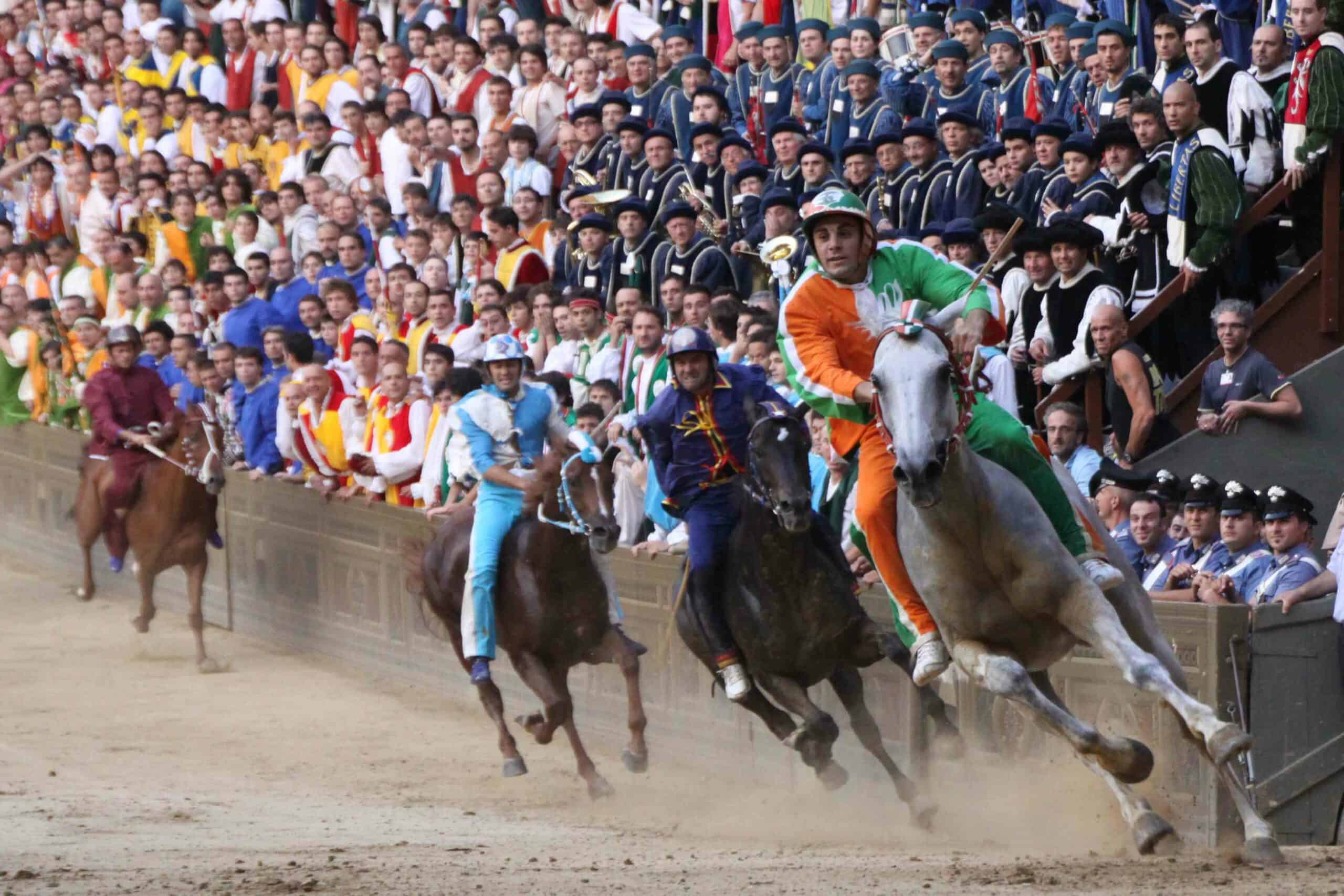 Although the race lasts only ninety seconds, it is the climatic catharsis of an entire year of preparations, negotiations, contracting, festivities and prayers for the ten contrade or “neighborhoods” who know that they will be running in the next Palio. The Sienese veritably live and die for the Palio. The members of a winning contrada (or contradaioli) will celebrate with pacifiers in their mouths as a symbol of being reborn in victory. (See Below) The contrada that has not won in the longest time is called la nonna – “the grandmother”. (You can read our blog about the contrade here: “The Contrade of Siena”).

The flag bearer of a contrada is always  present at the baptism, first communion, wedding, 25th and 50th wedding anniversaries, and funeral of one of its contradaioli with the characteristic colors and animal symbol of the contrada held high. As one historian put it, “the Palio does not last for a minute and a half, but rather for all the year, or rather for all the lives of those Sienese who participate… the Sienese never really stop thinking about the Palio.”

The word “palio” comes from the Latin word “pallium” or “standard”. It is simply a rectangular piece of cloth upon which is depicted the BVM (Blessed Virgin Mary) and which is awarded to the winning contrada (See Below). And although other Italian cities also ran their own Palios, in 1935, Fascist dictator Benito Mussolini declared that the term “palio” be used exclusively to refer to the Sienese race.

The race, therefore, takes  the name of its very trophy, and has been run in Siena, in one form or another, since at least 1238CE. Although the earliest Palio races did not take place in the Piazza Del Campo (“palio alla tonda”) as they do today but began outside the city and ended at the Duomo (called “palio alla lunga”). Gradually, the “palio alla tonda”  became the exclusive format for the race and since then the city regularly transforms its most central urban space into a temporary race track by transporting tons of yellowish-orange-clay-rich earth into  Piazza del Campo in order to cover the flagstone pavement that circumvents the nearly-semi-circular piazza. (See Below)

There are 17 contrade or “neighborhoods” in Siena and each is represented by a symbol, most of which are animals – eg. Dragon, Turtle, Goose, Ram, etc. (See Below)  Although only 10 of the 17 contrade are allowed to race in each Palio so as to avoid overcrowding the track. The people of Siena see themselves firstly as citizens of their contrada, and then only secondly as Sienese. The urban-tribal unit called the contrada is what provides a Sienese person with his/her social identity, and the Palio is a way for the contrada to measure itself within the city. Clear territorial boundaries define the contrada within the city. Yet, within the contrada there are no socio-economic boundaries – rich and poor, liberal and conservatives – are all equal.

Although in the past, contrada identity was determined by birth or where a child was born, this custom was changed in the later part of last century has home birthing became more rare. In fact, since the main hospital in Siena is located in the territory of the Selva contrada, technically all the babies born there became part of that contrada. So, one worried grandfather from the Turtle contrada actually threw a bucket of dirt from his back yard under his daughter’s delivery table in order to ensure that his grandchild would be of his own contrada! Today contrada membership is inherited from one or both parents or obtained through a secular baptism ceremony. Children of parents of different contrade will alternate between parents during palio time. Married couples of different contrade may return to their own respective contrada during palio time. This has helped keep the divorce rate in Siena quite low. Parents will teach their children to love their own contrada and hate their enemy contrada from a very early age using things such as derisory nursery rhymes. The contrada is literally everything for the Sienese and winning the Palio during one’s lifetime is the ultimate achievement!

Learn about what goes on on the actual day of the Palio in my next blog: “And They’re Off: Palio and Pathos in the City of Siena.” 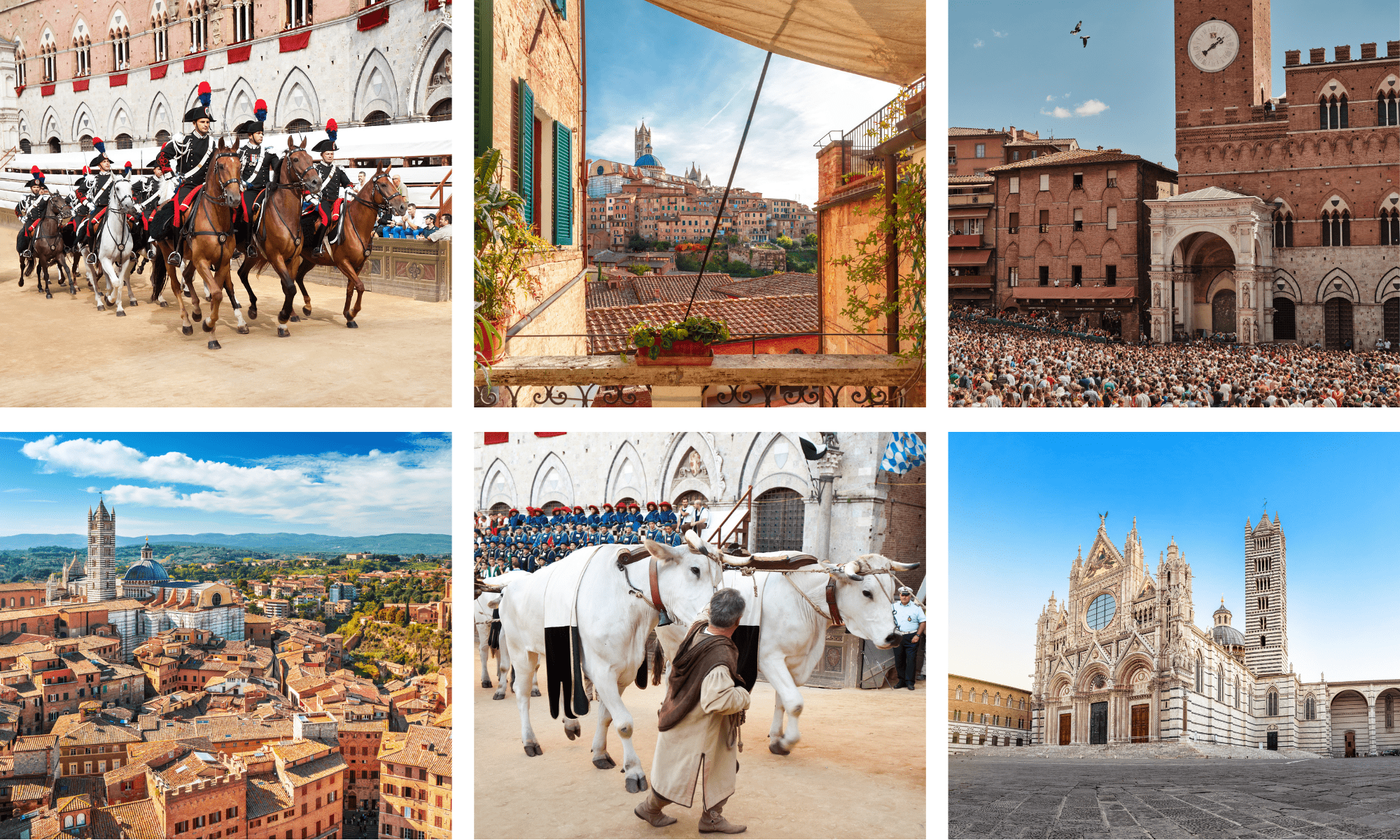 With Tyranny and Injustice for All

And They’re Off! Palio and Pathos in Siena