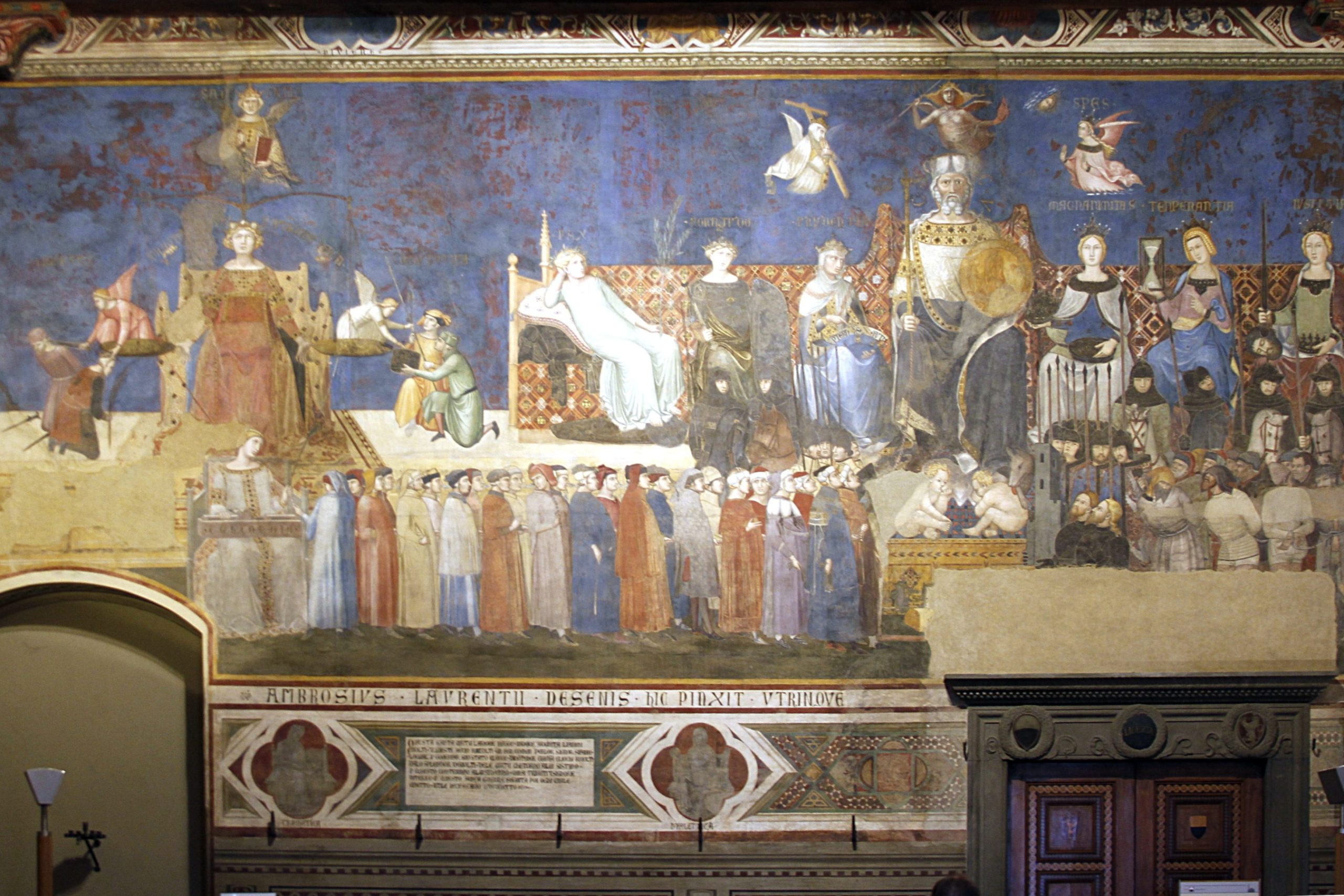 In my last blog Find Myself a City (or at this point a country) to Live In, we examined the effects of good government as represented in the homonymous mural by Ambrogio Lorenzetti in the medieval oval office of Siena, known as the Room of the Nine. But the unanswered question was just exactly what ethical, moral and social principles must be employed in order to produce such an earthly utopia? The answer is given in the celebrated fresco on the adjoining north wall of the room called the Allegory of Good and Bad Government. (see above)

The allegory begins in the top-left-hand corner where the golden-winged figure of Sapentia, or “Wisdom” holds scales, the plates of which are kept balanced by the seated figure of Iustitia, or :”Justice” who is dressed in a red robe. Justice’s head is flanked on both sides by the inscription “Judge diligently, ye who rule the earth!” (see above). Each plate, in turn, represents a different form of justice, with the red-robed-winged figure on the left plate representing “distributive justice” as it simultaneously crowns and beheads men in a gesture of reward and punishment. The white-robed-winged figure on the right plate instead represents “commutative justice” acted out through a just and fair exchange of goods between men. (see below)

Ropes descend from the respective scales and are united in the left hand of the seated female figure dressed in grey below (see below). A carpenter’s plane lies on her lap with the word Concordia, or “concord/agreement”, revealing her identity. The plane, of course, is used to “smooth things over” in times of discord or disagreement. But the pun goes even deeper: Concordia– “con cord(i)a” or “with rope” as she, in fact, sits “with rope” in hand (didn’t take much to amuse a 14th-century politician…).

The rope in turn is passed to a processional group of 24 men that represent Siena’s earliest communal  governmental body and that draws the rope towards twin boys suckling at the teats of a she-wolf to the right (see below).

Wait… what? Twin boys and a she-wolf? I thought we were in medieval Siena, not ancient Rome! Siena, in fact, does claim Senus, son of the defunct Remus – as in the Garfunkel to Romulus – as their founding ancestor. Story goes that before Romulus slew his twin, Remus had fathered two boys named Aschius and Senus. Both fled the Aventine hill in Rome before their nasty homicidal uncle could encore. Senus headed north and settled in an area made up of three hills – the Sienese Trimontium– that reminded him of Rome’s Septimontium. But because he was so young and it was open season on mythological-orphaned boys, the gods decided to intervene and protect young Senus with a white cloud that made him invisible to threats during the day and a black cloud to do the same at night. And so, when Senus came of age, he founded the great city of Siena that would adopt the protective colors to adorn their flag known as the Balzana. (see below)

Now back to our regularly-scheduled programming…

The twin boys sit at the feet of a stern-looking man to whose scepter the rope is attached (see above). His robe is divided black and white. His scepter draws its power from wisdom, justice and tradition and upon his shield appears the BVM.  This figure of course personifies the Commune of Siena.  Around his head appears the four-lettered acronym that defines Siena – C.S.C.V: Comunis Senis Civitas Verginis (Commune of Siena, City of the Virgin [Mary])  much like Rome and its S.P.Q.R (Senatus Popolusque Romanus).

The male personification of Siena is surrounded by females instead personifying those allegorical virtues that should guide any successful democracy, beginning with the three theological virtues hovering around his head – Faith, Love and Hope. These three metaphysical virtues, which, according to St. Paul, will endure even beyond time, indicate a moral “soul” to a democracy.

Then, from left to right, the six “earthly” virtues that define an ideal Cabinet for any ruler. Starting with the Betty-Boop-Bomb-Shell on the far left who represents Paxor “Peace”, with olive branch crown and branch in hand (see below). Folks, that flimsy transparent gossamer must have had the censors in an uproar!!! Isn’t secular art great?

So why so sultry? Because don’t we all desire peace? Is she not appealing to everyone? Note also the armor tucked under her cushion that might represent the repression of war, or perhaps the idea that in order to maintain peace, sometimes you need war…

To the right of war sits Fortitudoor “Fortitude” represented as strong woman with mace and shield (see below). Next to her sits Prudentiaor “Prudence” who indicates a scroll with the words “past, present and future” written on it – study the past so as to make informed decisions in the present that will positively affect our future. Prudence is also sometimes represented as a woman looking into a mirror, that is, simultaneously forward and backwards.

Then to the other side of the male figure of Siena sits Magnanimitasor “Magnanimity” (if you play Scrabble, it’s a game ender…) (see above). A well-governed state is proud in heart and generous in soul. Notice the dark pan on Magnanimity’s lap which once held gold coins that have hence lost their gilding. To the right of Magnanimity sits Temperanzia or “Temperance”, recognizable by the hourglass that she holds. Temperance today is usually interpreted as restraint from alcoholic consumption, but at its root is the Latin word “tempus” or “time”.  Temperance means taking your time, self-control and moderation in all actions and decisions.

And the final figure sitting to the far right of this ensemble of virtues is no stranger – Iustitiaor “Justice” appearing for the 4thtime in this recipe for good government reflecting her paramount role in any successful democracy. Here she is poignantly personified as a female with a crown in her left hand (reward) and a sword in her right hand that rests upon a disembodied head lying upon her lap (punishment).

So take all these ingredients, mix well, then bake at 425℉ for 35-40 minutes, let cool and what you get is what we have already seen and celebrated in the Effects of Good Governemnt, which we discussed in my last blog.

But what happens when democracy goes sour??? Find out in my next blog “With Tyranny and Injustice for All”

…or just turn on the news!!

With Tyranny and Injustice for All