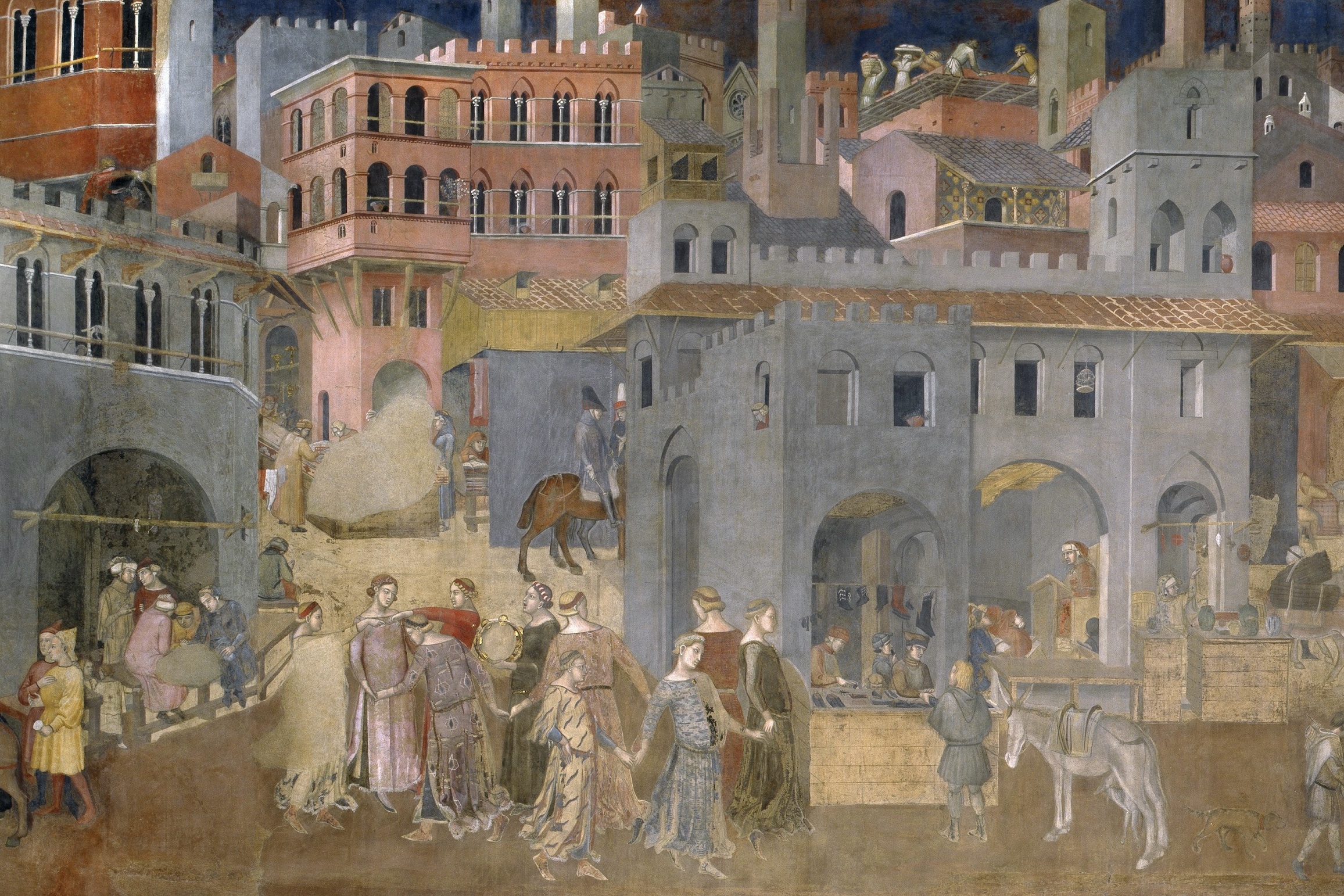 These days it is way too easy for just about any discussion to degenerate into a polarized and uncompromising political debate.But the great thing about this next series of blogs is that I don’t have to get political. The art does it for me!!!!

In 1337, Ambrogio Lorenzetti set about frescoing the walls of the Sala dei Nove, or “Room of the Nine”, in Siena’s town hall, known as the Palazzo Pubblico, with the first-entirely-secular painting cycle of the Middle Ages. (see below). The fresco cycle is known as the Allegory of Good and Bad Government and adorns the walls of what was once the medieval republic’s “Oval Office” as it was where Siena’s nine-elected-executive town councilors would meet to govern the city.

Upon entering the room, the councilors would immediately see the positive effects of successful government in both an urban setting and in the contado, or rural countryside around Siena, in the Consequences of Good Governmentfrescowhich is located directly across from what was once the original entrance of the room. (See above)

In the urban portion of the Consequences, we have one of the most vivid visual records of daily life in a thriving medieval city.(see above)  Although a viewer might think that the city view is actually intended to represent Siena because of the presence of the distinct bichrome bell tower and white-capped dome of Siena Cathedral in the upper left-hand corner (for Siena Cathedral see my blog https://rockyruggiero.com/blog/mine-is-bigger-than-yours-an-acute-case-of-cathedral-envy-in-medieval-siena/), these details were added in the 17thcentury. This city instead represents “utopia” – from the Greek “no place” – that is, no place because no place has perfect government. This image represents instead a proverbial carrot dangling before the horse. That is, what Siena’s government – and what every government – should be struggling to achieve. And just what exactly are the results?

When you have good government, young virtuous women are married off as represented in the bridal procession in the lower-left-hand corner of the scene with the bride in red mounted on a white horse. (see below)

When you have good government, you have fiscal and legal transparency (including public tax returns) as represented by the notaries drawing up legal contracts under the arch to the right of the bridal procession. (see above).

When you have good government, you have dancing girls in the middle of the street!!!What more could you ask for?(see above)

The identity and role of these dancing figures in the lower right-hand corner is still the object of much art historical debate, including a study of the taxonomy of the insects that appear on their robes. Fear not, I will spare you the pedantic arguments. Needless to say, their festive and jovial attitude add to a rather optimistic feel to a well-governed city.

When you have good government, you have economic prosperity, as evidenced by the cobbler with a customer in the lower left-hand corner of the detail above.

But what is perhaps most extraordinary about this visual-expository utopia is the prominent role of education. That’s right, EDUCATION in a 14th-century fresco. Right there in the arch above the donkey (pun possibly intended) is a teacher at his lectern with attentive students just gobbling it all up. (see above)

In this author’s modest opinion, the foundation of any ethical society is something that I remember hearing quite a bit about in presidential campaigns when I was younger, but which has hence almost entirely disappeared from electoral rhetoric – EDUCATION!

“Dēmocratia”: from the Greek “Demos” –“people”; “cratia” – “rule”. But damn it, make sure that those people who rule by vote are provided with quality education or WHO KNOWS WHO JUST MIGHT END UP IN OFFICE…

And when you have good government, you have urban growth and expansion, as evidenced in the construction detail in the background. (see below) If you have ever wondered what those holes are on the outside of old Italian buildings, now you know. They were left behind by the scaffolding beams that supported the workers.

The general sense of prosperity, security and well being then extends into the countryside, or contado, beyond the city walls. (see below)

This veritable Shangri-La represents the first landscape painting since Antiquity – about 900 years. What need was there for landscape in the escapist-abstract-Christian art of the Byzantine world?With the rebirth of civic infrastructures and institutions in medieval Italy, the secular became important again; the profane worthy of our attention.

The fertile  countryside is protected by the figure of Securitasin the upper-left-hand corner, who holds a gallows as a candid reminder of the consequences to anyone who threatens her. (see above) People move freely in and out of the city for sport (see the mounted figures setting off for falconry), or for commerce   (see the black typically Sienese “Cinta” pig – yummy – being brought to market). Farmers till the land and harvest grain in a romanticized-bucolic image that would make even Jean-François Millet envious (see The Gleaners). (see below)

Now that you are all smiling and feeling all gushy inside, I leave you with one lingering question – just what does it take to create a kind of government that could create such a perfect place????

Stay tuned for my next blog – “With Liberty and Justice for All” – and find out!!!!

The Day the Virgin Mary Got into Politics

Judge Diligently (or At Least Not Idiotically) Ye Who Rule the Earth!!!