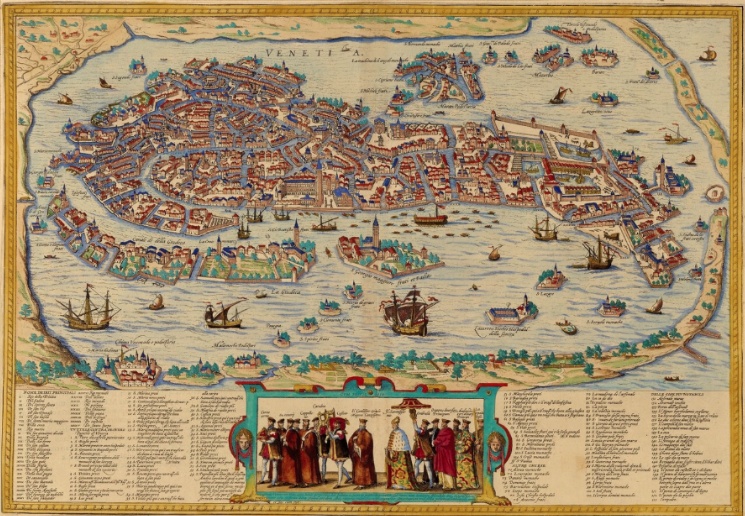 The traditional foundation date of Venice is March 25, 421CE, 11 years after the sack of Rome by Alaric the Visigoth, and 55 years before the last western Roman emperor, ironically named Romulus Augustus, was deposed. In 452CE, a second barbarian invasion led by Attila the Hun caused a mass migration of refugees onto the islands of the Venetian lagoon in search of safety. These islands offered refuge to the seafaring Italic people since the landlocked central-Asian barbarian invaders had little practicality with seamanship. The salt flats of the lagoon also offered a lucrative economic potential, as salt was a vital commodity for preserving food. And so the two most fundamental aspects of Venetian society were established – sea power and commerce. Through the 6th and 7th centuries, further barbarian invasions caused additional influxes of refugees onto the lagoon islands. Collectively, these islands formed a loose association of communities with no clear socio-political nucleus. Evidence of this is found in the Latin name of Venice, which is a plural noun – Venetiae.

As early as 526CE, Venice had submitted itself to the rule of the Byzantine Empire in exchange for protection and exclusive trading rights throughout imperial territory. In the 8th century, this ideal marriage ended in a rather messy divorce. The radical imperial decree of “Iconoclasm” that was issued in 726CE by Byzantine Emperor Leo III, which essentially ordered the destruction of all icons and holy images in his domain, marking the definitive separation between Latin (today Roman Catholic) and Greek Christianity. Under the encouragement of Pope Gregory II, the imperial provinces of Italy rebelled. The Byzantine Exarch of Ravenna was assassinated, his provincial governors put to flight, and local communities began to choose their own leaders. The islands of Venice chose Orso from Heraclea, who was given the title of Dux (duke). In Venetian dialect, the term would become “Doge”, and the office would continue unbroken through 117 successors and for 1000 years.

As independent Venice grew in importance and began to understand its prominent role in the geopolitics of the time, as liaison between east and west, it needed one last bit of legitimacy; something that would symbolize its divine destiny as the Christian successor to the Roman Empire. That something was an important holy relic. According to Venetian legend, at the end of the 1st century CE, while St. Mark was traveling from Aquileia to Rome, his ship momentarily set ashore on the then uninhabited islands of the Rialto. An angel then appeared to Mark and spoke the now famous words, “Pax tibi Marce, evangelista meus, Hic requiescet corpus tuam.” (“Peace to you Mark, my evangelist. Here will your body rest.”) This legend would be the pretext for one of the most famous incidents of grave robbery in Christian history. In 829CE, Venetian merchants in Alexandria stole the body of St. Mark and smuggled it back to Venice in a crate full of pork products in order to dissuade suspicious Muslim guards whose curiosity was aroused by the sanctimonious odor permeating from Mark’s body. In 832CE, the first basilica of St. Mark was begun in order to house the relic. Mark was not Peter (who is buried in Rome), but the body of an actual evangelist would more than suffice, and his symbol – the winged lion – marked all Venetian endeavors and is ubiquitously displayed throughout the city.

In 870CE, the Venetians turned to reforming their political structure. The doge would no longer be appointed, but instead elected by a senate, which, in turn, was in part elected by a Great Council. Venetian government was considered to be the perfect constitutional balance of monarchy (doge), oligarchy (senate) and democracy (Great Council). So perfect in fact, that the Venetian constitution was considered to be a gift from God. This first Christian republic would become the longest-lasting republic in history, surpassing even the ancient republics of Greece and Rome (not to mention our own meager 241 years of US history), enduring for nearly a millennium. In Venetian history, there were no great men like Pericles or Caesar, or traumatic political crises that formed its historical memory. It was, as it still calls itself today, La Serenissima – “the most serene republic”.

Florence, Italy In A Nutshell

What does Michelangelo have to do with me?