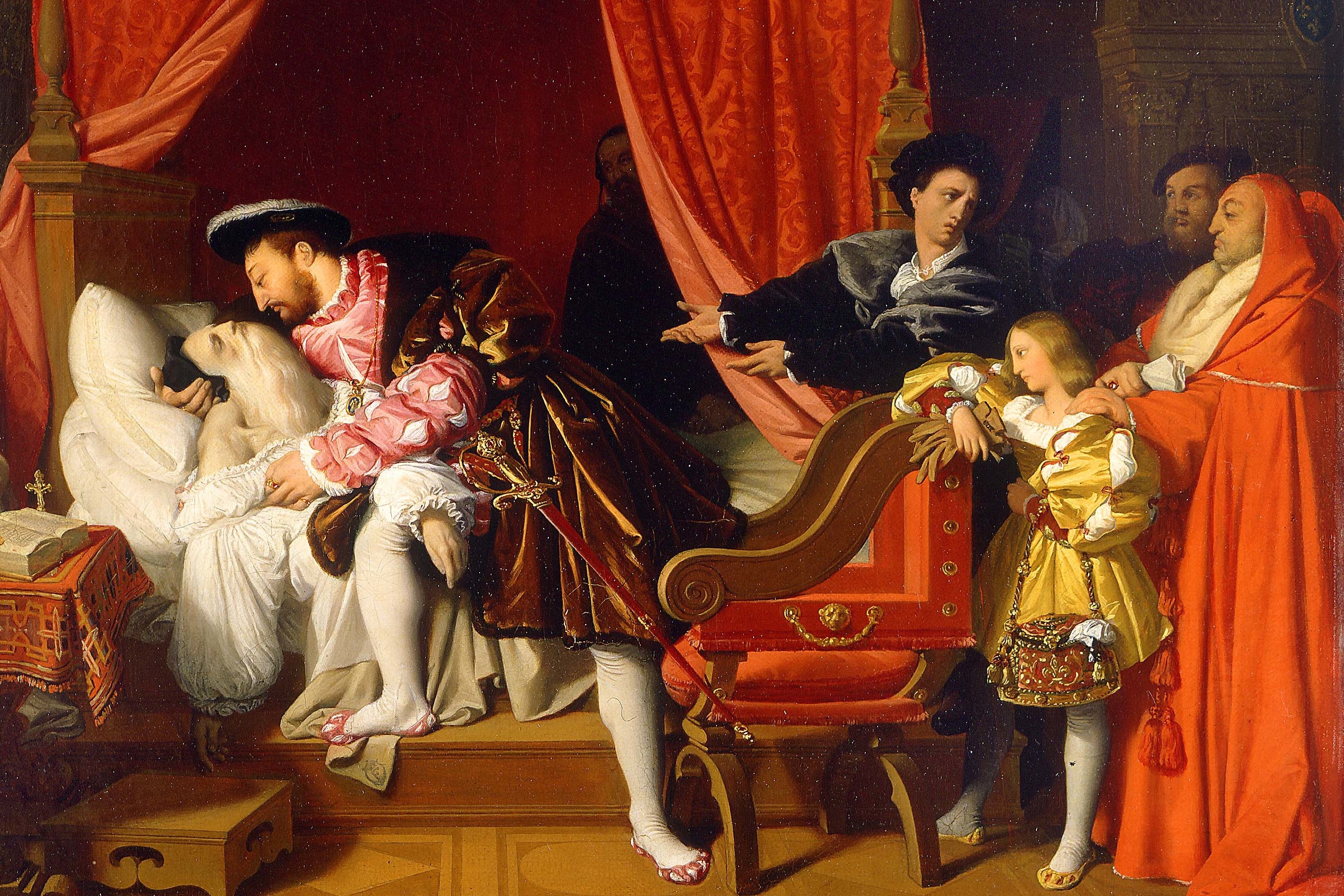 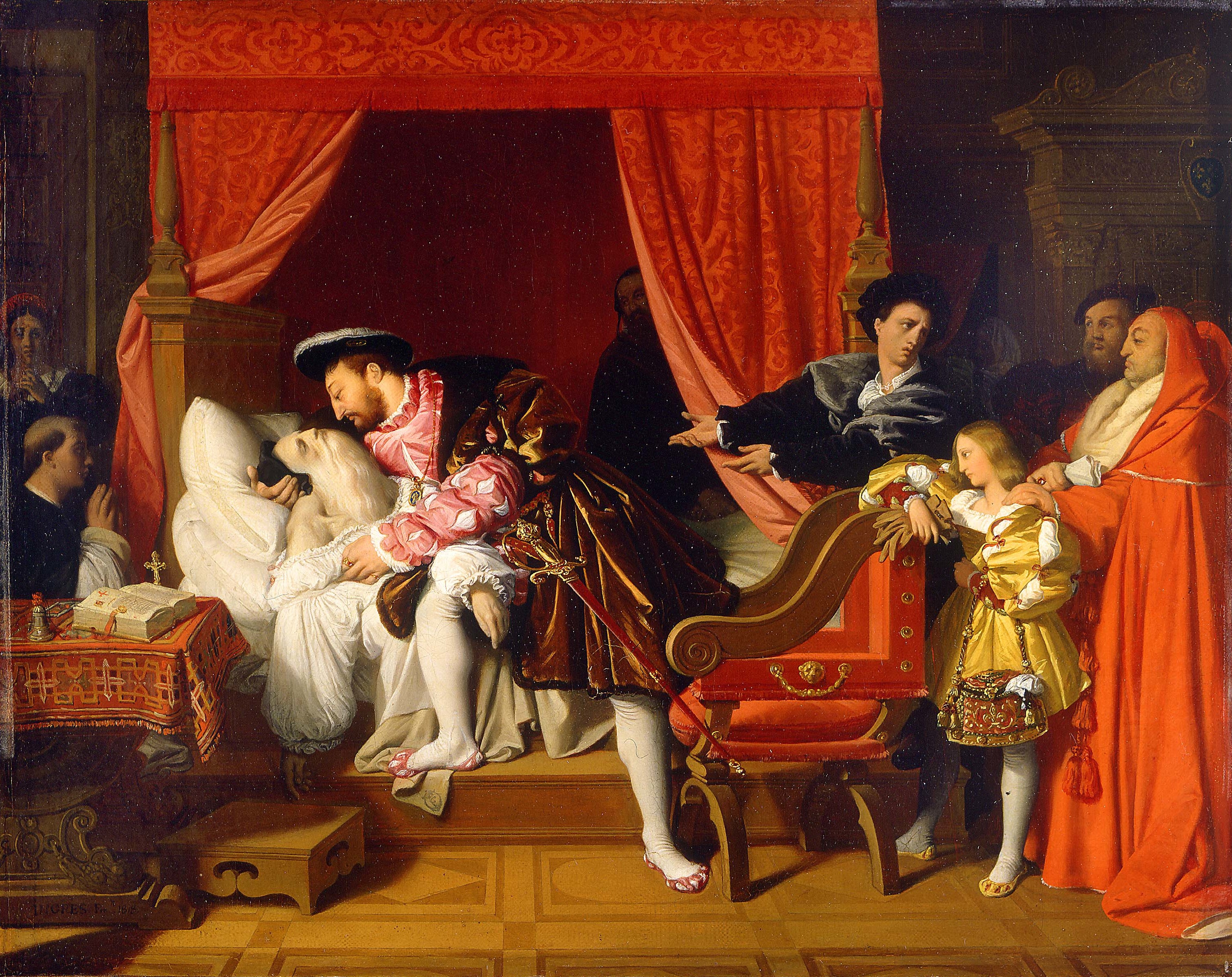 On May 2, 1519, Leonardo Da Vinci passed away at the Chateau Clos Lucé, in Amboise, France. Why was Leonardo in France? Because three years earlier, King Francis I had made him his “Premier Royal Architect, Artist and Mechanic” (oh-la-la). According to the 16th-century artist and historian, Giorgio Vasari, Leonardo breathed his last breath in the arms of the same king. (see above) A fitting end for perhaps the most singular human being in history (having Leonardo rise from the dead and ascend into heaven would have been equally impressive, but that finale was already taken). This year, of course, marks the 5th centennial of Leonardo’s death, so what better way to celebrate the Italian artist than by organizing a blockbuster-once-in-a-lifetime exhibit grouping together as much of Leonardo’s limited artistic and scientific oeuvre in one place? And that is exactly what the French did. YES, THE FRENCH, NOT THE ITALIANS!

On Oct. 24, 2019 (through to Feb. 24, 2020), an exhibit fittingly entitled “Leonardo Da Vinci” opened at the Louvre in Paris. Cast as the “mother of all Leonardo shows”, the Louvre exhibit was intended to leave even the not-so-distant-2011 “Leonardo: Painter at the Court of Milan” show at the National Gallery of Art in London – which exhibited 9 Leonardo paintings -  in the dust. I think that most people do not realize just how rare Leonardo’s paintings really are. I used to say 14, maybe 15, finished and/or unfinished paintings in total on planet earth (not sure how many Leonardo produced while living on his native planet before becoming terrestrial). “Maybe 15” because scholars still debate about the Litta Madonna at the Hermitage in St. Petersburg. Of course, after the half-billion-dollar sale of the Salvator Mundi in 2018 to that morally upstanding Saudi crown prince, we may now need to modify that assessment to 14, maybe 16, paintings in the whole world by Leonardo.   Here is a breakdown of Leonardo’s known paintings (question marks indicate uncertain attributions):

7. Lady with the Ermine (Portrait of Cecilia Gallerani)

11. Adoration of the Magi (unfinished)

Now here is the breakdown of what is included in the Louvre exhibit:

But wait, that is a total of nine paintings… just like at the NGA in London nine years ago. So, what’s all the hubbub bub? Well, I suppose that if we add some pretty important non-paintings to the list, such as the Vitruvian Man (which I have only seen 5 times in my entire life) from the Academia in Venice, and the so-called Burlington Cartoon (Virgin, Child, St. Anne and SJB) from the NGA in London, as well as Andrea Del Verrocchio’s (Leonardo’s teacher) bronze ensemble of Doubting Thomas from the Museum of Orsanmichele in Florence, it makes for a rather impressive lineup!!! (see below) 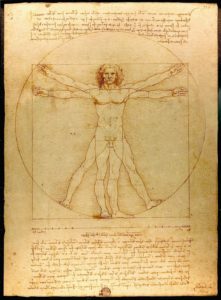 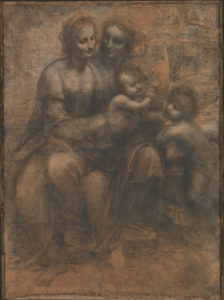 In reality, France should consider itself fortunate to have any of Leonardo’s Italian works at all. After having had requests for either of the two Leonardo’s at the Uffizi denied – the Annunciation because it is still too soon to travel again after its 2007 voyage to Japan, and the Adoration of the Magi because it was deemed too fragile to travel – the former (thank God) Popularist Italian minister of culture, Alberto Bonisoli, tried to renege on several other promised pieces. (see below, or maybe don’t…) 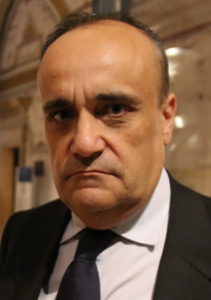 One of his staff proudly reminded the world that “Leonardo was Italian, he only died in France”. Suddenly, an “Italy First” movement erupted and just days before the Louvre exhibit began, an Italian judge temporarily blocked the loan of the Vitruvian Man, claiming that it too was too fragile to travel. Fortunately, for all those thousands of people who had already purchased tickets to the Louvre exhibit, the decision was overturned, and the world’s most famous drawing followed in Leonardo’s footsteps and made its way over the Alps to gay Paris.

As an Italian, what bothered me most about the nationalistic circus that surrounded the Leonardo exhibit in France is that Italy never thought to organize a blockbuster show of its own. Some would argue that the Louvre was the logical venue as it already possessed 5 of the approximate 15 known paintings by Leonardo, but if you look at those numbers again, another 5 paintings are in Italy – and one, the Last Supper, is a fixed mural. So, what if Italy had brought all of its Leonardo’s to Milan, which is where Leonardo actually spent a majority of his life. Now, that would have made for one mamma mia exhibit…

And although it may sound to you that I am rattling my cultural saber, instead I am pointing out a major flaw in contemporary Italian culture. That instead of pursuing the infantile “you can’t play with my toys” attitude, if Italy had indeed organized a true blockbuster exhibit worthy of the great Italian universal genius, then they would have had a legitimate excuse to deny its paintings to the French. In fact, chapeau to the French for organizing their exhibit in the low-tourist-season fall/winter months when the absence of Leonardo works, which are always THE major attraction of any museum, would have had a much smaller impact on revenue.

So, what exactly did the Italians do to commemorate the 5th centennial of Leonardo’s death? From Oct. 29, 2018 - January 20, 2019 (while nobody was in Florence) the Leicester Codex, owned by a certain Signore Bill Gates, was exhibited at the Uffizi Gallery. And while it was an extraordinary experience to see Leonardo’s hydraulic and nature studies, I can confidently say that the Uffizi, home to 2 1/4 Leonardo paintings and numerous drawings, could have done much more.

Then on March 9, 2019, an exhibit called “Verrocchio: Maestro di Leonardo” opened at the Palazzo Strozzi in Florence. Scusate, why not organize a “LEONARDO: STUDENT OF VERROCCHIO” exhibit instead. Who cares about Verrocchio??? Leonardo died 500 years ago, not Verrocchio!!! In reality, the whole show was a pretense to insert a controversial sculpture of a “Laughing Madonna” into Leonardo’s oeuvre. It is worth mentioning that the Victoria and Albert Museum, which is home to the sculpture, does not even support the attribution!!!!

Being Italian is not easy…

Perhaps the only event of note that took place in Italy was the exhibition of the Vitruvian Man drawing at the Accademia Gallery in Venice between April 17- July 14, 2019. I actually went to see it 3 times, and each time I was astonished at just how few people were there. Venice was mobbed, as it always is in the summer months, but very little of that mob was admiring the world’s most famous drawing. Lucky for me, but somewhat disappointing for Leonardo, who deserves every inch of the long lines, all of the frustration of the unobtainable tickets, and every bit of the general public hysteria which always surrounds him and his works.

And this year, 500 years after the death of Leonardo from VINCI, ITALY all of the Leonardo mania can be found at the Louvre in Paris, France. I guess that we will just have to hope that we can get our act together in Italy before 2052 so as to properly celebrate the 6th centennial of Leonardo’s birth!!!!

And They’re Off! Palio and Pathos in Siena

You Know When You are in the South of Italy When…