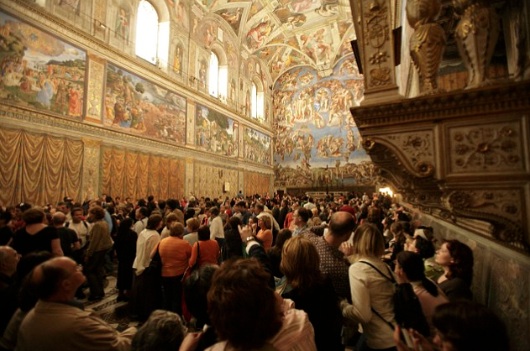 Let’s be honest, in the eyes of most people, art history is a rather trivial subject. There is little need for it in our everyday lives and modern culture. The traditional method of teaching art history (dark room with an asthmatic slide projector, never-quite-clear-enough slides, and a monotone monologue by an unseen lecturer with an over-inflated vocabulary) has only perpetuated this belief, as it relegates both the subject and the importance of art to the past – dead men, therefore dead art. But if this were the case, how can we explain the fact that more than 25,000 people per day crane their necks to catch a view of the Sistine Ceiling in Rome, Italy; or that more than 5,000 per day stand with mouth agape in front the statue of David in Florence, Italy. These numbers tell us that “Michelangelo has a lot to do with me,” as millions of people spend millions of dollars and thousands of hours in order to travel to places such as these, which have become our modern sanctuaries and cultural idols. Secular tourism in a way has replaced religious pilgrimage.

But why? Did all these people study art history? Do they all want to harvest the fruits of their studies by finally standing in the shadow of Michelangelo’s genius? The answer is instead that they really don’t know why they traveled all that way. Someone or something told them “you just have to see it!” That “someone or something” is our collective consciousness, which is very much aware of what “we” – as a collective species – are capable of achieving. There is a little bit of all of us in that ceiling. That 17ft.-tall nude guy with the slingshot is a reflection of all of us – of what we all can be.

There is a little Michelangelo in all of us, and there is a lot of us in Michelangelo. Michelangelo was not 100ft. tall. He could not fly. He did not have any cool super powers or electronic gizmos. Michelangelo ate, drank (little and badly), laughed, cried and made a hell of a lot of money during his career. Michelangelo di Ludovico di Buonarroto Simoni (better known as Michelangelo) was a human being just like you and me. Who knows, maybe even a little less human, as he wasn’t the nicest guy to ever wear a codpiece, you know.

So why am I picking on Michelangelo? (I guess I am a little bit). Because I am using Michelangelo as a symbol of art history, mainly because he is probably the most famous artist to have ever walked the earth. My “hero assassination” is simply an attempt to emphasize his imperfect humanity. And even though Michelangelo is dead, humanity is not. Therefore neither is art. Art is everywhere in our world. From the most mundane objects such as cereal boxes, to the super chic runways of the fashion world, to the big screens of Hollywood, art dictates the aesthetic. Art is beauty, even when it’s ugly. From the clothes we wear, to the car we drive, to the house we live in, the look of it all is the result of centuries of men and women who were put on this earth to create beauty. Styles change, but beauty is eternal.

Art is a gift to all of us. A tremendous gift that few of us can express, and that fortunately the rest of us can enjoy. To ignore or dismiss this gift would be nothing less than tragic.

When the Light of the World Went Out