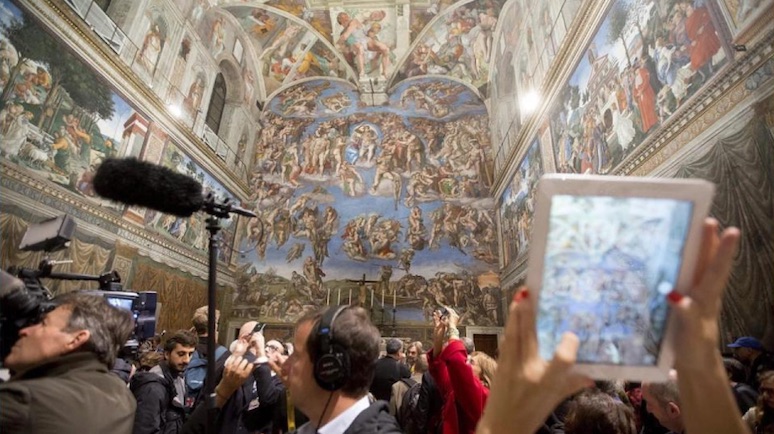 I think few people today remember how radically different the Sistine Chapel ceiling looked before its restoration in the 1980s. I do. I remember seeing the dark, grimy pre-restoration ceiling when I was about 8 years old, and then the chromatically-miraculous cleaned ceiling in 1993. In fact, I try to make it a point to remind those who I bring to the chapel how lucky they are to be able to see the ceiling the same way Michelangelo did before his death in 1564 and the first application of varnish was applied to the ceiling shortly thereafter. But I also point out that as obfuscating as that dark varnish was, it encapsulated the ceiling and protected it from centuries of candle soot and pollution. Now that that varnish is gone, what is left to protect Michelangelo’s sublime frescoes?

In 2010, the then director of the Vatican Museums, Antonio Paolucci, ominously warned that there were too many visitors to the Sistine Chapel. Four years later, he went on to “hope” that the annual number of visitors to the chapel would not exceed 6 million, which is what he described as the “sold out” parameter for the logistical capacity of the museums. But then, in 2016, there were, in fact, more than 6 million visitors; while in 2017, under the direction of the first-ever-female director of the museums Barbara Jatta, an average of 27,000 people per day visited the chapel during peak tourist season, which, in the case of the Sistine Chapel, seems to be all year round. It is kind of alarming though when the director of a museum claims that there are too many people visiting his/her museum, but then does nothing about it. The reason, one would imagine, is the revenue created by such staggering numbers when the cost of admission to the museums (including reservation fee) is EUR 21,00/person.

So, who cares how many people enter the Sistine Chapel? Well, we all should, and a lot! What most people don’t realize is that we ourselves are the biggest threat to works of art. A single person produces 17ml of moisture and 350,00 Joules of body heat per hour (roughly the same amount of heat as a 100W light bulb). Now multiply those figures by the 27k people walking through the Sistine Chapel daily, and what you have is an enormous microclimate bomb that stresses and deteriorates the very plaster frescoes that make the chapel so famous. Not to mention the fact that we are also carrying atmospheric pollutants, pollens, and other harmful substances on our clothing, skin and hair, which we then release into the chapel and which also contribute to the degeneration of the paintings. I am not a restorer, but I do know enough of them to know that with the present volume of visitors, there might not be anything left to visit in a not too distant future.

The Vatican has taken some important conservatory steps. In 2014, the Sistine Chapel received a new LED lighting and climate control system. Yet, these are a far cry from the precautions taken elsewhere for important works in relatively small buildings. In Milan, no more than 25 visitors every 15 minutes pass through a series of hermetically sealed doors that maintain constant temperature and humidity in order to view Leonardo’s Last Supper. In Padua, visitors to the climate-controlled Scrovegni Chapel are limited to 25 every 20 minutes and watch a video in a large deionization chamber while walking on a special carpet that cleans their shoes as they pass through sealed doors that finally lead them into the chapel. Such precautions might seem extreme but may very well become the norm in world where we are literally loving our art to death!

Florence Cathedral and the Beauty of Boredom

How a Little Man Changed the World: St. Francis of Assisi