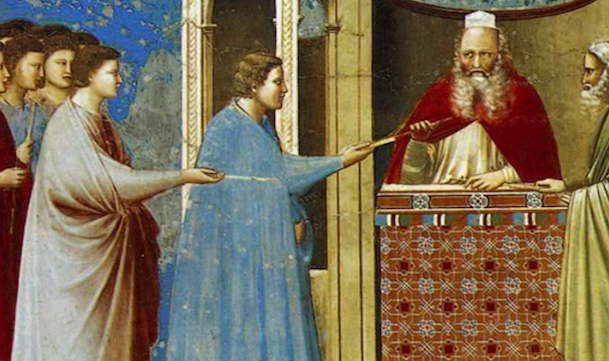 While having dinner the other night with a friend who is also in the “business” (by which I mean art history of course), I told him that I just couldn’t stop blogging about Giotto and the Scrovegni Chapel. His sympathetic response was that mine was an obvious dilemma as “there is so much to say about Giotto and the chapel!”.

In reality, it’s not that there is so much that I have to say, as it is how much Giotto actually did!!! He is the artist; I am the critic. But unlike most critics, I do not project the frustration caused by my own artistic impotence upon those with talent. Instead, I try as best I can to fittingly extol them and to share their genius with the world (see blog – What does Michelangelo have to do with me?).

So, let’s see how far I get before I think that you will stop reading…. and I come to grips with the fact that I will probably have to write at least another blog about the G-Man (see Giotto) in order to get it all in (poor me).

The great ones do indeed make it look simple. Thereby, if the beguiling simplicity of Giotto’s art is the meter by which to measure his greatness, he might just possibly be the most innovative painter in history.

In the highest tier of frescoes in the Scrovegni Chapel, Giotto depicts scenes from the life of the BVM as recounted in the 13th-century The Golden Legend written by an Italian named Jacobus de Voragine. The story recounts how the BVM’s eventual parents, Joachim and Anne, were well advanced in age and childless (see O.T./Abraham and Sarah).

The fresco cycle of the Scrovegni Chapel is the world’s first-ever motion picture, and like every great movie, it begins in dramatic fashion!

The opening subject is the Expulsion of Joachim (above). One immediately recognizes Joachim’s advanced age by his full head of white hair (see “keep it simple”). After years of faithfully offering sacrifices to God, the high priest finally pulls Joachim aside and says basta (see “enough”), informing Joachim that his childless state was obviously indicative of God’s indifference to his pleas. The priest then proceeds to expel Joachim from the temple. The theatrical gestures and expressions of the characters immediately set the tone of the scene, and I can almost hear the sad, wailing cello music in the background as poor Joachim clutches his sacrificial lamb like a teddy bear (see silent movie). And to really add salt to the wound, Giotto adds a “life’s not fair” juxtaposition. While old man Joachim is being expelled, a young man (see full head of brown hair) is being blessed within the temple walls, probably after informing the priest that his wife was expecting!

In the next scene, a dejected Joachim goes out into the wilderness (above). His emotional state is clearly discernable (see “down in the dumps”) through his hanging head and the most primal and instinctive of gestures when we are under stress or duress – clasping one’s mid-section. Not to mention that he is clearly oblivious to the celebratory yelping of Fido as his gaze goes right past the dog. But how do we know that Joachim is not always melancholic? By that most timeless of expressions in the eyes of the inside figure of the pair who greet Joachim, who “shoots a look” at the other as if to say, “Oh, boy. What’s up with him?”

Now, if I am the director of this movie, a caption would appear at the bottom of the scene that reads,

MEANWHILE, BACK IN NAZARETH

and we would cut to the next scene – the Annunciation to St. Anne (below). Suddenly, we are reminded of the other protagonist of the story – St. Anne – who is at home doing what all virtuous women do while their husbands are away – that is, spinning yarn (see don’t look at me, I’m just telling the story). And while the angel is inside announcing to Anne that she is with child, the female figure in white to the left of the door, who is also apparently virtuous as she too spins yarn, stops mid gesture and her eyes turn to her left as she eavesdrops on the conversation.

So more than just telling the story of the BVM, Giotto goes to the trouble of socio-psychological commentary on human nature – i.e., BOY ARE HUMAN BEINGS NOSY!!!!

Now, for the next few scenes – the Dream of Joachim, the Meeting at the Golden Gate, the Birth of the Virgin, and the Presentation of the Virgin – see my last blog “Dante and Giotto’s Ugly Children”

The next three scenes instead represent my absolute favorite sequence of paintings in the history of art (see, “the best part of the movie”).

The BVM grew up to be so beautiful and virtuous that all the respectable “unmarried men of the house of David” desired her hand in marriage. But just which one was deserving of her? God informed the temple priests that all potential suitors should present themselves at temple with a rod (see phallic symbol). These rods would be collected and blessed, and whichever rod distinguished itself from the others, the respective bearer would win the hand of the BVM in marriage. One man was particularly fond of the BVM but thought that he was unworthy of such a young maiden because of his advanced age – see Joseph – and was unsure whether or not to present his rod. Giotto begins the visual sequence with the Presentation of the Rods (below).

We can clearly identify the younger men by their dark hair, while the haloed Joseph on far left has the George-Clooney salt-and-pepper look instead.

The next scene instead depicts the Watching of the Rods (below), in which, essentially, nothing happens. So why would Giotto waste precious wall space on “nothing”? He did so in order to create suspense.

Believe me when I tell you that no other 14th- century painter was concerning himself with suspense!!! Most of them were still simply struggling to make people look like people in their paintings!!

The final scene – the Marriage of the Virgin Mary (below) – depicts the dramatic finale of the story. In the end, Joseph did not present his rod. He instead remained at the back of the temple with his rod in hand, when it suddenly burst forth into bloom as a lily grew out of it and a dove descended upon it. And so, Joseph was clearly the man designated by God to be the husband of the BVM. Notice how the other suitors react. The one to the left of Joseph in blue is angrily crying foul. It looks like he might want to take a closer look at Joseph’s magic rod… The figure to the left of him in orange is actually breaking his rod – and you can interpret that however you like.

The nuance of this particular legend was by no means lost on its contemporary audience. In Taddeo Gaddi’s (see Giotto’s student and godson) later rendering of the same subject, arguably the most humorous figure in the history of art appears (below). In the lower left-hand corner of the scene, a young man dressed in a yellow robe walks with nothing less than a sapling on his right shoulder (see detail below). Clearly, the moral to take away from this painting is that it is not the size of the rod that counts, it’s the magical powers….

Stay tuned for more Giotto in my next blog about cinematic themes in the “Life and Passion Christ” in the Scrovegni Chapel!!! 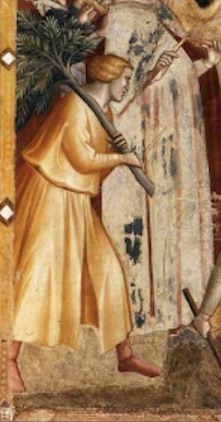 NBC News: After 500 years, a clue to who inspired Botticelli's 'Birth of Venus' 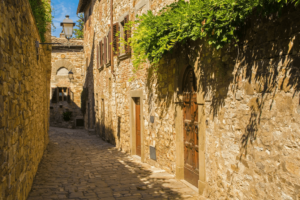 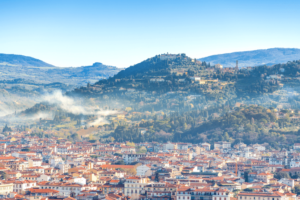 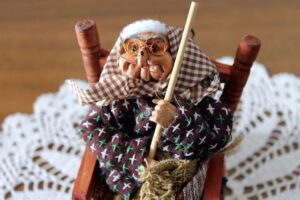