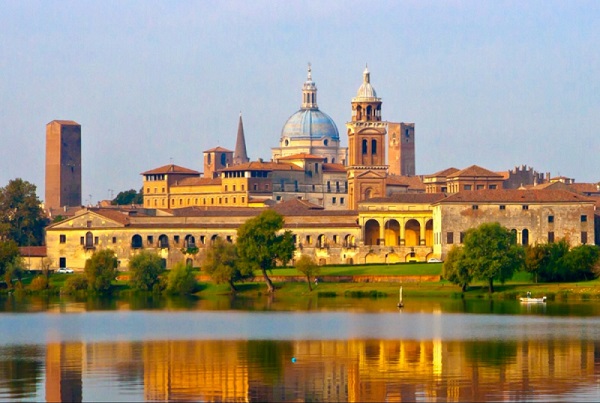 In Canto I of the Inferno, Virgil, the ancient Roman author of the epic poem the Aeneid presents himself to Dante with the following words, “Mantua me genuit” – “Mantua made me”. Well, not only did Mantua, or “Mantova” as the city is called in Italian, produce the great classical poet, but also some of the greatest art treasures of the Renaissance. The ruling family of Mantua, the Gonzaga, employed artists such as Andrea Mantegna, Leon Battista Alberti, and Giulio Romano in order to transform their remote Lombard city into a thriving center for the arts.

Although the Gonzaga family usurped control of Mantua from another family as earlier as 1328, it was not until the reign of Marquis Ludovico Gonzaga (1414-1478) in the fifteenth century that the city gained artistic importance. Serving as a condottiere, or “mercenary warlord” for Cosimo “the Elder” de’Medici, Ludovico was exposed to the artistic explosion that was occurring in the Medici city of Florence. Eager to create the same cultural atmosphere in his own city of Mantua, Ludovico began courting great Renaissance artists, offering them both honor and significant wealth.

Andrea Mantegna (originally from Padua) was one of the first princely painters of the Renaissance and went to Mantua 1459, where he served as official court painter for the family for nearly 50 years. Amongst other duties, Mantegna was also asked to fresco the formal reception room of the ducal palace. This room, known today as the Camera degli Sposi, is one of the 500 rooms contained within a 350,000ft.2 royal palace. In his fresco, Mantegna transports the viewer back in time by vividly portraying the Gonzaga family at court in their contemporary dress, actions and settings – all the way down to the Marquis’ favorite dog “Rubino” who sits under his throne!

After securing the services of Mantegna, Ludovico then hired the great Florentine architect and theoretician Leon Battista Alberti to design the new Basilica of Sant’Andrea. This church houses the second most important relic in Christendom – the blood of Jesus Christ, allegedly brought to Mantua by the very Roman soldier who pierced Jesus’ side with his lance, St. Longinus.

In the 16th century, Ludovico’s grandson Federico II Gonzaga, was elevated in rank from “Marquis” to “Duke”. Federico II had spent several years in Rome as a youth and was exposed to the great works of the Roman Renaissance such the Sistine Chapel ceiling and the Raphael rooms in the Vatican. Hoping to recreate his grandfather’s special relationship with Mantegna, Federico brought Raphael’s prize pupil, Giulio Romano, to Mantua in order to design and decorate his sumptuous pleasure palace known as the Palazzo del Te. Some of Romano’s beautiful frescoes in the palace border on debauchery, reflecting the rather hedonistic activities that occurred therein. But the most breathtaking work of the Palazzo is the so-called “Room of the Giants”, where Romano painted colossal titans being crushed by the Olympian gods in a sort of 16th -century virtual reality.

If all this is not enough, Mantua was also home (albeit temporarily in the first case) to two of the world’s most famous fictional characters – Romeo and Rigoletto! After killing Tybalt in Shakespeare’s Romeo and Juliet, Romeo flees to Mantua to live in exile. In Giuseppe Verdi’s great 19th century opera Rigoletto, the homonymous hunch-backed court jester loses his beloved daughter Gilda at the Gonzaga court. There is even a Rigoletto museum in Mantua today! Not really sure why since he didn’t exist… but tourists love it.

And when you’re in Mantua, you have to try the pumpkin-filled tortelli! A little on the sweet side for me as the pumpkin filling is spiked with amaretto liquor, they are nonetheless a culinary treasure. Wash them down with some local fizzy Lambrusco wine, and finish the meal with the local caloric bomb of a dessert called “sbrisolona”.

Come explore Mantua with us on our upcoming Northern Italy program from Oct. 16-20, 2017.