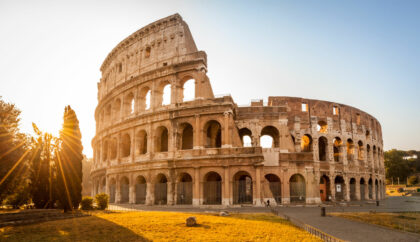 This lecture will explore the history and greatness of the civilization that was Rome. From its monarchical foundations in the 8th century BC, to the collapse of the Empire in the 5th century AD, Rome was the city and civilization that dominated the ancient world. Rome’s territorial expansion would encompass nearly half of the known world, and Greco-Roman culture would be exported to the far corners of the Empire. The epicenter of the Empire was Rome itself, where Roman ingenuity and aspiration would produce some of the most celebrated monuments of all time.

This lecture will begin at the Coliseum, where we will examine the largest amphitheatre of the ancient world, and discuss the most popular of Roman social activities – gladiatorial games.

Lunch Break – Lunch will be arranged at a local, traditional restaurant in Rome.

We shall then continue through the Roman Forum, stepping back in time to the days of Romulus, Julius Caesar, Titus and Constantine, weaving our way past the ruins of their great culture and through the tales, legends and events of their great history. We will climb up to the Capitoline Hill, connecting the ancient emperors to the Renaissance popes. The lecture will conclude in awe- inspiring fashion at the Pantheon, arguably the most perfect architectural monument of all time.