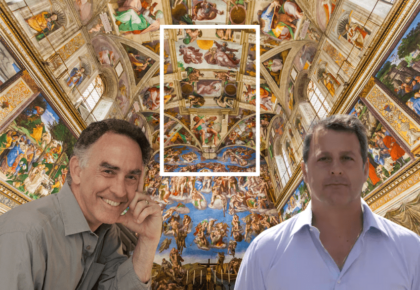 If any work of art exemplifies artistic genius, it is this well-known masterpiece. No matter how familiar the work, no matter the trials of getting into that crowded space, few visitors have not felt awestruck standing under this titanic achievement. Like a handful of timeless monuments – the pyramids, the Taj Mahal and the Great Wall of China among them — the Sistine never fails to astonish us.

In many ways the ceiling is a compendium: of Michelangelo’s art, of the Renaissance, of Christian theology. Like Verdi’s Requiem or Milton’s Paradise Lost, the ceiling is a transcendent work of genius that is never exhausted through looking or describing. In the words of the great German writer, Johann Goethe: “Until you have seen the Sistine Chapel, you can have no adequate conception of what man is capable of accomplishing.” Professor Wallace, a world authority on Michelangelo, will illuminate this masterpiece and help you see it with fresh eyes.

Professor Wallace has published extensively on Renaissance art: in addition to more than 90 articles and essays (including two short works of fiction), he is the author and editor of eight different books on Michelangelo, including the award winning, Michelangelo: The Complete Sculpture, Painting and Architecture (1998), Discovering Michelangelo (2012), and a biography of the artist, Michelangelo: The Artist, the Man and his Times (2010/11), which is available in paperback. His most recent book, Michelangelo, God’s Architect (2019) focuses on the artist’s late life and his greatest creation: the building of St. Peter’s Basilica in Rome.