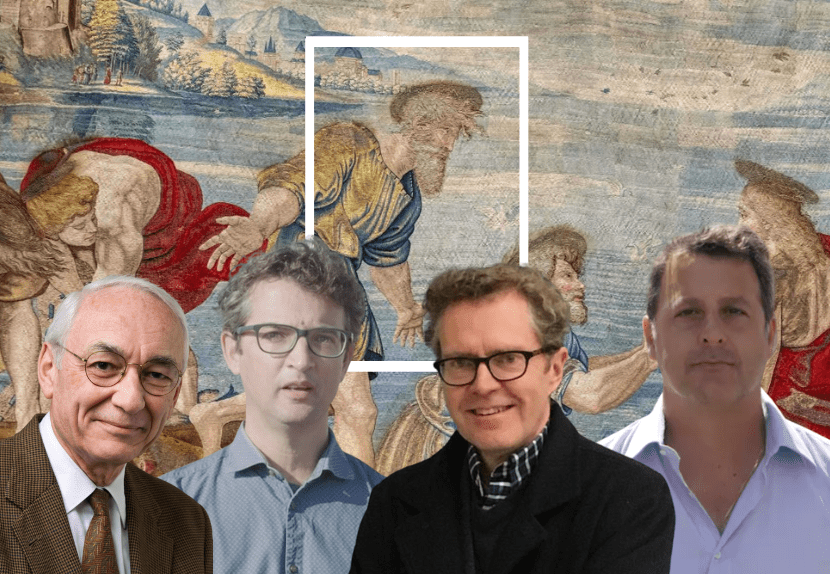 In 1515, Medici Pope Leo X commissioned Raphael to produce a series of 16 full-scale cartoons from which an equal number silver and gold-threaded tapestries were to be produced in Brussels. The final location of the tapestries was the Sistine Chapel and would have allowed Raphael’s work to be measured side-by-side with Michelangelo’s frescoes on the ceiling. Raphael ultimately produced 10 cartoons, 7 of which survive and are located today in the Victoria and Albert Museum of London.

Join Dr. Rocky for this exclusive webinar where he will explore the mathematical principles behind the great painting, as well as how, for the first time, science and theology synergized in Renaissance art.

Michelangelo (1475-1564) has an unusual training for an artist of his time insofar as his first training was with a humanist scholar (his father had grand plans for him), followed by apprenticeship in a painting workshop, followed by participation in the Medici sculpture garden where he met sculptors who trained him (one of whom broke his nose in a disagreement!) and other scholars learned in classical art and texts. Typically, however, he did much of his early work outside of Florence, as did other sculptors during the fifteenth century so that in the event that the work was defective in any way he would not be embarrassed in front of his fellow Florentines, a notably critical audience. Work in Bologna, Siena and Rome gave him access to earlier sculptural models, especially from the ancient Roman period. The many and varied influences on his art during his early years help us to understand his transformation of the traditions of both painting and sculpture and ultimately his being known as “il divino”.

EXCLUSIVE WEBINAR | “The Art of the Deals: Artists, Bankers and Merchants in 15th-century Florence”
Presented by Ross King

The Renaissance in Florence was the product of a perfect storm of wealthy bankers, talented artists, ingenious financial instruments, and a new attitude toward money. This new attitude took its cues not from age-old religious injunctions against usury but instead from the even more ancient ideas about wealth and expenditure recently discovered in the works of writers such as Aristotle. This lecture will look at how, armed with new philosophies of how to live in the world, bankers and merchants such as the Medici, the Strozzi and the Rucellai used the gift of their vast wealth to adorn the city of Florence with palaces and paintings.

It is well known that classicizing inscriptions were widely used in Renaissance Italy to mark elite domestic buildings with the authority and identity of their patron-owners. Previous studies have tended to discuss these textual interventions on the designed surfaces of the palazzo as personal statements of a given patron’s erudition and desire for memorialization. Instead, this paper moves between better-known monumental ‘private’ inscriptions of individual palaces and the often-overlooked ‘public’ texts that were widely affixed to both private and public sites. The latter were often mundane statements that legislated behaviour, professed civic cohesion, claimed sponsorship of public amenities or quite simply indicated the ownership of rental property by a third party. By considering both textual forms in conjunction, Fabrizio Nevola will argue that the blurred and contested boundaries between domestic and public urban space were literally inscribed on the walls of the streets of the Renaissance city. Comparisons will be drawn between evidence from various Italian cities, and the proposal will be advanced that through the sixteenth century wall inscriptions came increasingly to be used as an instrument of government control, as they functioned as visual markers of how authorities sought to manage the everyday uses of public space.