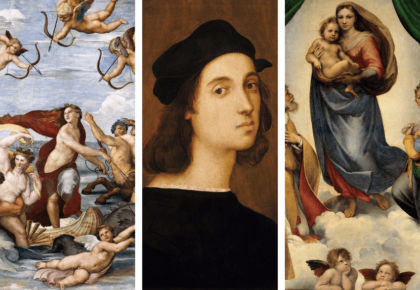 To purchase this course on a payment plan of two monthly installments, please click here.

This course will examine the extraordinary career of one of the most important painters in history – Raphael Sanzio da Urbino – better known simply as “Raphael.” Along with Leonardo da Vinci and Michelangelo, Raphael heralded in the period known as the High Renaissance. Combining grace, elegance and beauty, Raphael defined the standard for idealized painting. His balanced and harmonious compositions became the visual definition for what was described as “academic painting” in 18th-century France.

We shall follow in the footsteps of the artist to trace his short but prolific career not only through the sublime art of his paintings, but also through his architectural designs, archeological expertise, and tapestry cartoons.

Born in the culturally rich city of Urbino in 1483, Raphael’s earliest formation as a painter was through his father, Giovanni Santi, who was a court painter for Duke Federico da Montefeltro. Most scholars believe that Raphael also apprenticed with the great Umbrian master Pietro Perugino. This lecture will explore Raphael’s earliest known works, as well as his contribution to the Piccolomini Library frescoes in Siena Cathedral by another of Perugino’s students named Pinturicchio.

Raphael’s presence in Florence is documented between 1504 and 1508. This period is considered one of the most formative in the painter’s career and was most likely motivated by the presence of Leonardo da Vinci in the city as well. The influence of Leonardo is immediately visible in the paintings that Raphael produced at this time, such as the St. Catherine of Alexandria, which are much more dynamic and sophisticated and move beyond the provincial Quattrocentesco influence of Perugino.

In 1507, a 24-year-old Raphael Sanzio exploded onto the art scene in Rome when Pope Julius II awarded him the contract to fresco the walls of his personal apartments. The results were some of the most beautiful paintings of the Renaissance – including his famous School of Athens. In this painting, his depiction of the greatest philosophical and scientific minds of the ancient world, Raphael demonstrates his unrivaled ability to create a balanced composition, as well as sublime figures. This lecture formally identifies its characters, which, in some cases, are also portraits of Renaissance artists, as well as analyzes how Raphael synthesized the styles of Leonardo and Michelangelo into his own unique painting style.

– Wednesday, September 21: Lecture 4 – The Roman Period: The Stanza of Heliodorus

After completing the Stanza della Segnatura, Raphael went on to fresco the second of Pope Julius’ apartments. Known as the Stanza of Heliodorus, after the subject of one of the paintings, Raphael’s style acquires a new level of maturity as his command of monumental painting and complex themes significantly improved. Executed with the assistance of a workshop, the Heliodorus frescoes also clearly reflect the political and theological views of his patron.

Of all of Raphael’s works, his “Madonna and Child” paintings best embody what Vasari described as his dolce stile – “sweet style.” Vasari was of course referring to the sentimental quality that makes Raphael perhaps the most accessible of High Renaissance artists. But the tenderness and intimacy that permeate his prolific production of Madonna and Child paintings is without equal in the history of art.

Raphael was one of the most sought-after portraitists of Renaissance Europe. Building on the innovations introduced by Leonardo into the Italian portrait tradition, Raphael was able to capture the essence of his subjects like few other artists in history. His stately portraits of Julius II and Cardinal Alessandro Farnese, as well as his celebrity portraits of Baldassare Castiglione and Bindi Altoviti are but a few of his milestone examples of Renaissance portraiture.

In 1515, Medici Pope Leo X commissioned Raphael to produce a series of 16 full-scale cartoons from which an equal number silver and gold-threaded tapestries were to be produced in Brussels. The final location of the tapestries was the Sistine Chapel and would have allowed Raphael’s work to be measured side-by-side with Michelangelo’s frescoes on the ceiling. Raphael ultimately produced 10 cartoons, 7 of which survive and are located today in the Victoria and Albert Museum of London.

Raphael’s late period produced paintings that transformed the influences of Leonardo and Michelangelo into a style that was uniquely his own. Works such as The Transfiguration reflect an artist pushing chiaroscuro to the extreme as well as using color and muscular forms as a means of expression. Yet, Raphael’s later works were also the product of a large workshop. The largest, if we are to believe Vasari, of the entire Italian Renaissance numbering as many as 50 assistants. Many of these artists, such as Giulio Romano, would go on to their own successful careers while others would be collectively known as the “school of Raphael.”