Florence and Siena: A Tale of Two Cities 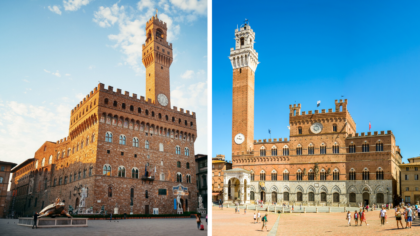 FLORENCE AND SIENA: A TALE OF TWO CITIES

“Florence and Siena: A Tale of Two Cities”
Presented by Dr. Rocky Ruggiero

During the thirteenth century, Florence and Siena were two of the wealthiest and most influential cities in the world. Much of their wealth was derived from the manufacturing and trade of wool textiles; but other industries, such as banking, were also born in Tuscany. The proximity of the cities not only eventually led to an intense economic and political rivalry, but an artistic one as well. This lecture will examine how the fourteenth-century art and architecture of these two cities reflect not only an intense sense of nationalism, but also one of the greatest periods of artistic production in history, with artists such as Giotto, Duccio, Simone Martini, Arnolfo di Cambio and Ambrogio Lorenzetti competing to demonstrate the greatness of their respective cities.

Florence and Siena: A Tale of Two Cities