“A fool is one who admires other cities without visiting Rome.”

Our new virtual program “Rome: The Eternal City” is a great opportunity to visit Rome with Dr. Rocky Ruggiero without travelling! It provides a perfect mix of real-time live-stream tours directly from Rome and live presentations through which we can experience and appreciate Rome’s beautiful art and architecture in greater detail.

Join us on a virtual trip to Rome!

Description: This virtual program will explore the development of art and architecture in Rome from Antiquity to the Baroque period. The ancient Romans referred to their city as the “caput mundi” or the “capital of the world.” Stretching as far west as the Atlantic Ocean, as far south as the Sahara, north to modern-day Scotland, and east to the Euphrates River, the Roman Empire encompassed nearly half of the known world. The ancient monuments of Rome still stand as a testimony to the former power of the true Eternal City.

Format: Live tours directly from the streets of Rome and live presentations on Zoom platform.

ALL LECTURES WILL BE RECORDED AND AVAILABLE FOR VIEWING AT YOUR CONVENIENCE FOR THE DURATION OF THE PROGRAM AND THE FOLLOWING WEEK.

We begin our program with a LIVE STREAM at the Colosseum, where we will examine the largest amphitheatre of the ancient world and discuss the most popular of Roman social activities – gladiatorial games. We shall continue past the Roman Forum, stepping back in time to the days of Romulus, Julius Caesar, Titus, and Constantine. Then, we will climb up to the Capitoline Hill, connecting the ancient emperors to the Renaissance popes.

We shall analyze the architecture and reconstruct the engineering marvels of the mother of all amphitheaters – the Colosseum. We shall also discuss the jaw-dropping spectacles and bloody contests that took place during the most decadent period of ancient Roman history when emperors provided lavish foods and spectacular entertainment for their subjects. Today’s lecture will conclude in awe-inspiring fashion at the Pantheon. The Pantheon is an ancient Roman temple that has been described as the most perfectly designed architectural monument in history.

One aspect of Classical Antiquity revived by the Renaissance was the tradition of suburban villas. Used by the Romans as a means to escape the stresses of urban life, during the Renaissance, these structures became a means to express wealth and power. The two quintessential Renaissance villas were built by the Chigi (later owners named Farnese) and the Borghese families in the 16th and 17th centuries, respectively. Often used for debaucherous and hedonistic banquets, these structures also house some of the greatest masterpieces of Renaissance and Baroque Rome, created by such masters as Raphael, Caravaggio and Bernini. The extraordinary art, which has adorned these structures for the past five centuries, serves as testimony to the often-lascivious revelry that ensued within them. From Raphael’s celebrated fresco of Galatea, to Giulio Romano’s erotic Loggia of Psyche in the Farnesina; to Bernini’s breathtaking mythological statues of Apollo and Daphne and Pluto and Persephone in the Borghese, the nature of the art clearly reflects the intentions of its patrons.

In this LIVE STREAM, we shall stroll the streets of Rome, from the majestic Spanish Steps to the romantic and theatrical Trevi Fountain, and conclude at the historic Piazza Navona. Bernini’s dramatic Four Rivers Fountain and Borromini’s revolutionary church of Sant’Agnese will dazzle you. Together, we will walk through the Baroque heart of Rome visit some of the city’s most iconic and famous squares and works of art in REAL TIME!

Known as the pittore maledetto – the “cursed painter”, Caravaggio not only revolutionized painting at the turn of the 17th and 18th centuries with his “hyper- realistic” style, he literally turned Rome on its head with his often-criminal behavior.  Spending most of his time between brothels and taverns, Caravaggio’s love of the vulgar and violent became his primary artistic inspiration. His paintings would reflect his lifestyle, often depicting Christian subjects in completely inappropriate ways.  We shall follow the footsteps of the artist in the very neighborhood where he lived and view his paintings in the very churches where they first created controversy.

No complex in Rome better expresses the historical complexity of the city than San Clemente. The present Medieval church stands above an Early Christian one, which in turn was built atop of an ancient Roman palace and apartment building. But the most exceptional and mysterious part of the structure is the perfectly preserved Mithraic temple complex housed within. We shall peel back the strata of Rome, descending through millennia to the period when all Roman cults, including one called “Christianity,” cohabited peacefully.

We shall then address one of Michelangelo’s most extraordinary sculptures – the Moses – in the nearby church of San Pietro in Vincoli. The sculpture now sits as the central piece of the compromised tomb of Pope Julius II.  What could have been the greatest tomb of all-time was, instead, Michelangelo’s greatest unfulfilled commission.

Our final day together will begin by experiencing the awe-inspiring grandeur of the architecture of the most important church in the Catholic world – Saint Peter’s Basilica. Join us for this LIVE STREAM tour where we shall stroll across Bernini’s Ponte degli Angeli, admire the ancient-mausoleum-turned-fortress Castel Sant’Angelo, and then make our way down the Via della Conciliazione to admire the majestic beauty of the square and Basilica of St. Peter. 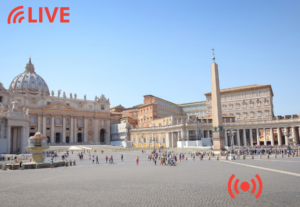 Few people realize that all of the grandeur of the Vatican – St. Peter’s Basilica (the world’s largest Christian church), the circa 10,000 rooms within the walls of the city, the Sistine Chapel, the Raphael rooms, the world’s greatest collection of Roman antiquities – is the result of the simple belief that the remains of St. Peter rest below his homonymous basilica. With the return of the Papacy to Rome in the late 14th century, the city began a long process of recovery from the collapse of the Roman Empire, which occurred a millennium earlier. The Pope would assert his role not only as the spiritual, but also as the earthly leader of the Latin Christian world. During the Renaissance, Popes would begin to emulate the Emperors of Antiquity and begin to appropriate much of their artistic language. With the reconstruction of St. Peter’s and the Vatican Palace, the Pope now also had an appropriate seat from which to rule as the “Father of Kings.” We will examine the major works of the Vatican collection including the Sistine Chapel, the Raphael Stanze, the Roman Antiquities, and Hall of Maps.