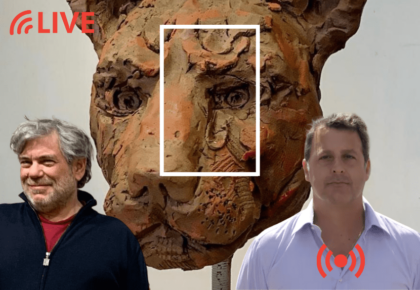 Join celebrated artist Marco Klee Fallani, direct from his studio in the heart of Chianti, Tuscany, for a live stream clay sculpture class. Marco will address the freshness of modeling only by hand and using simple wooden tools for details. By leaving gestures in the clay, as if the work were a fast charcoal sketch, you will learn to capture the moment of the creative process, producing a 3-dimensional object that carries the mark of making. Marco will use clay without any structure or armature inside to make it easier to hollow and eventually fire.

The live stream will include a 45-minute sculpture demonstration followed by 15-minutes of Q&A.

Marco Klee Fallani was born in New York City on April 14th, 1965. He frequented the Istituto d’Arte di Porta Romana and the Accademia di Belle Arti in Florence. In 1990 he was awarded a scholarship for a Master of Fine Arts by the California College of Arts, which he completed in 1993.

Fallani collaborated in the making of the bronze monument to Joe Louis for the city of Detroit and he prepared the molds and the plaster casts of the Guiglielmo pulpit for the ‘Museo dell’ Opera del Duomo’ of Pisa. In 2005 he designed the set for the ‘Teatro Del Maggio Musicale Fiorentino’ production of the operatic version of Maurice Sendak’s book’ Where the Wild Things Are’. In 2013 He was commissioned a large sculpture for the main square in the city of Arezzo. ‘Hope and Faith’ is an annunciation dedicated to the art of Piero Della Francesca. In August 2015, Fallani was invited by Viacheslav Zarenkov and the Creative World Organization of Saint- Petersburg, Russia, for ‘Saint-Petersburg through the Eyes of Contemporary Artists’. All paintings were donated to the organization.

Fallani has taught studio arts at various schools in Florence and in the United States including SACI, Polimoda, Lorenzo de Medici, Florence University of Arts, California College of Arts and was Department chair at Syracuse University in Florence, where he continues to teach painting, drawing and sculpture. His paintings and sculptures have been exhibited in Italy, the U.S, the Netherlands, Canada, the U.K. and Russia.