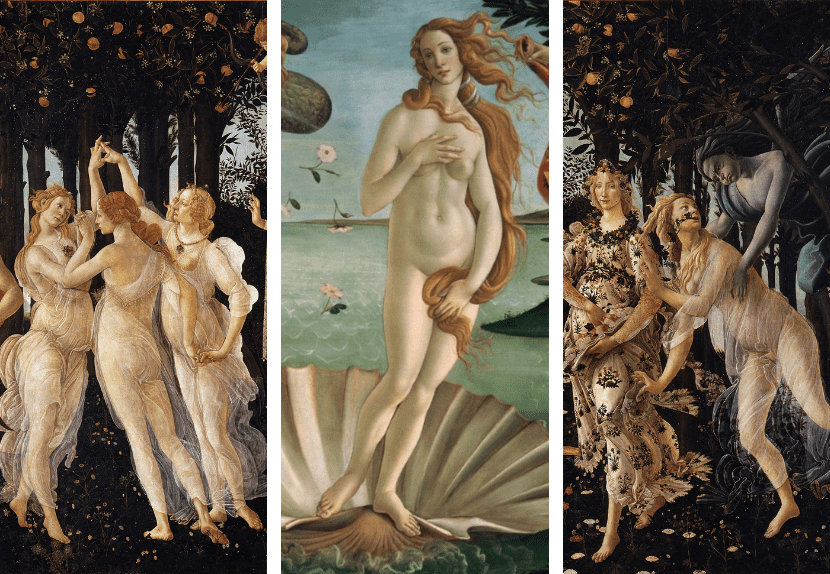 Alessandro Filipepi, better known as “Botticelli,” was one of the most important painters of the Italian Renaissance. During his 40-year career, Botticelli imbued a wide variety of subjects with unparalleled grace. He also revolutionized traditional Renaissance iconography with the introduction of mythological subject matter. This monograph course will explore Botticelli’s career from his apprenticeship to the great Fra Lippo Lippi, through his association with the Medici family, his trip to Rome as an artistic ambassador, his groundbreaking mythological paintings, and to the final mysterious years of his life which may have been marked by a profound spiritual crisis brought on by the influence of Fra Girolamo Savonarola.

Born in Florence around 1445, Botticelli was apprenticed to the painter Fra Lippo Lippi around 1461. It was from Lippi that Botticelli learned the art of graceful figures and intimate compositions. Lippi was so influential for Botticelli that it is often difficult to distinguish between them. After leaving Lippi’s workshop, Botticelli may have entered the workshop of Andrea del Verrocchio or the Pollaiuolo brothers before beginning his own career as an independent artist. 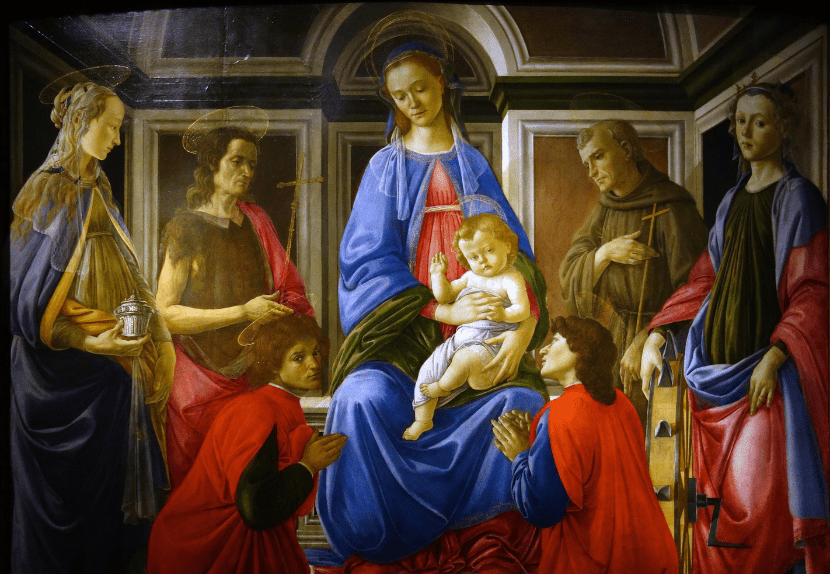 Botticelli’s graceful treatment of the Virgin Mary in painting resulted in some of the most beautiful figures in the history of art. Often accompanied by equally beautiful angels or saints, Botticelli’s Madonnas are usually idealized and often painted in the tondo format. It may have been Botticelli’s beautiful early Madonnas that caught the eye of the Medici family. Although Lorenzo “il Magnifico” de’ Medici most likely did not commission Botticelli directly, his direct involvement and sponsorship of humanism and Neoplatonism created the cultural environment that inspired Botticelli’s later mythologies. Botticelli was also responsible for one of the most celebrated portraits of Giuliano de’ Medici, who was assassinated during the Pazzi Conspiracy, as well as two “Adoration of the Magi” paintings that include portraits of several Medici family members. 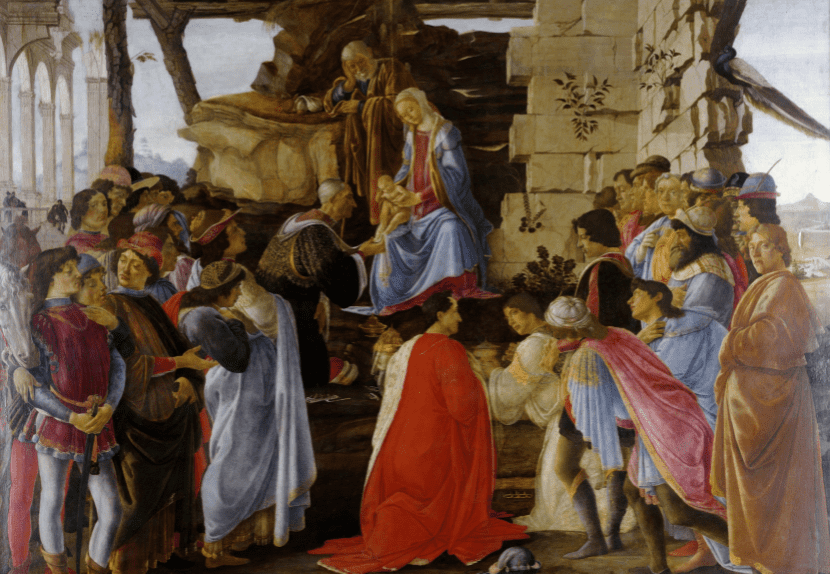 – LECTURE 3 – Wednesday, February 1: The Roman Sojourn and the Sistine Chapel

In 1481, Botticelli was sent to Rome by Lorenzo “il Magnifico” de’ Medici to decorate the walls of Pope Sixtus IV’s new chapel, better known as the Sistine Chapel. Along with Perugino, Ghirlandaio, Rosselli, and Signorelli, Botticelli would produce one of the most important fresco cycles of the early Renaissance. Botticelli’s three paintings – “The Trials of Moses,” “The Temptations of Christ,” and “The Punishment of the Sons of Korah – introduced the innovations of early Renaissance Florentine painting to Rome, but also reflect the influence of the classical world on the art of Botticelli. This classical influence was also present in the works that Botticelli produced after his Roman sojourn, such as “The Story of Lucretia” in the Isabella Stewart Gardner Museum in Boston. 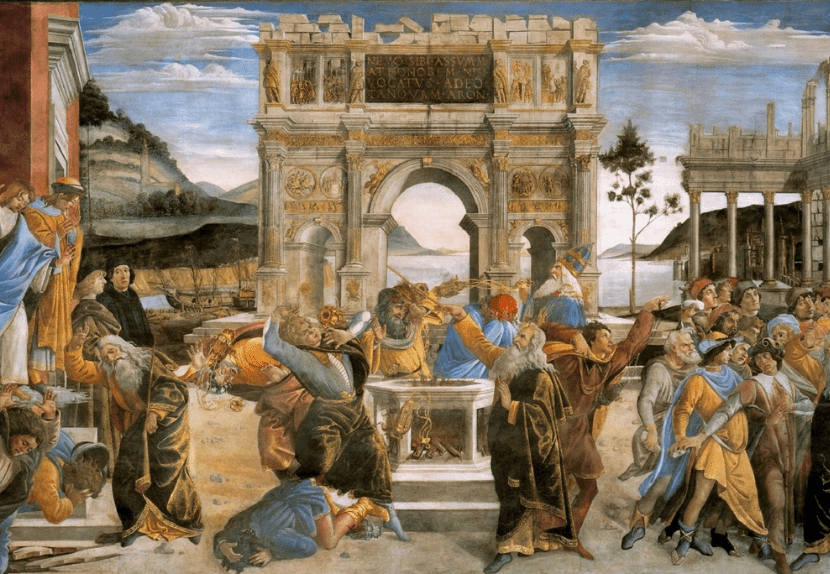 When Botticelli painted the “Primavera” and “Birth of Venus” around 1480, he opened a veritable Pandora’s Box. No longer were Renaissance artists limited to simply dressing Christian saints in togas and sandals, they could now gradually introduce the very literature, philosophy, and religion of the ancient Greco-Roman world into their own art. This lecture unpacks Botticelli’s great mythological paintings by identifying their characters and meaning and assessing their artistic impact. 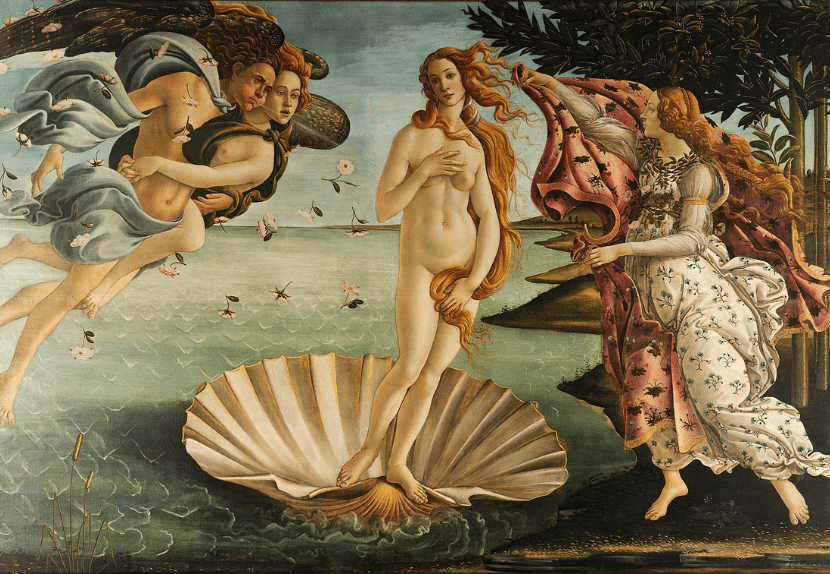 According to Vasari, “Botticelli was a follower of Savonarola, and this was why he gave up painting and then fell into considerable distress as he had no other source of income…so finally, as an old man, he found himself so poor that if Lorenzo de’Medici…had not come to his assistance, he would have almost died of hunger.” While most art historians today dismiss Vasari’s claim, it is undeniable that Botticelli’s career was on the decline in the final years of his life and that his late works never again achieved the vitality and grace of the younger artist. 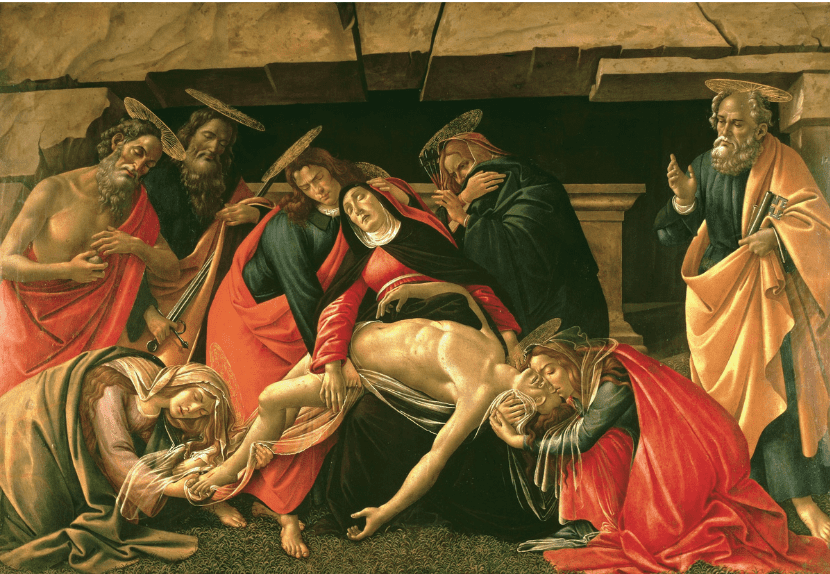