Renaissance women were immortalized in poetry and painting as “belle donne” or “beautiful women.” The 14th century poet Petrarch’s Laura inspired not just written poetry, but painted works by 16th century artists such as Giorgione and Titian. “Belle donne” appeared on canvases, ceramic dishes, and prints. While some were named, others remain anonymous. In this talk we’ll examine how “belle donne” images functioned and compare them with Bronzino’s portrait of Laura Battiferri – a poet and the wife of sculptor Bartolomeo Ammannati – to discover what happens when the subject of the painting is a poet herself.

Dr. Meghan Callahan has lived and worked in London since 2006. Like Rocky, she earned her Master’s degree in Art History from Syracuse University as a Florence Fellow. She has a Ph.D in Art History from Rutgers University. Meghan is the Assistant Director for Teaching and Learning at Syracuse University London, where she has taught art history and history classes on Italian Art in London and the UK; Women and Art: London and UK; and Underground London.

She worked on the reinstallation of the Medieval and Renaissance Galleries at the Victoria and Albert Museum, and then then with the sculpture dealer Patricia Wengraf. Meghan has published various articles and essays on the architectural patronage of the 16th-century mystic nun Sister Domenica da Paradiso, miraculous paintings in Renaissance Florence, and Italian Renaissance and Baroque sculpture. 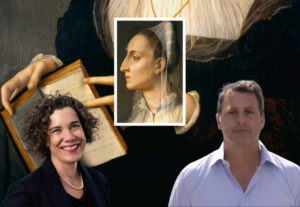 In 1598, the Medusa by Caravaggio, today in the Uffizi Museum in Florence, was donated to the Duke of Tuscany Ferdinando de Medici by Cardinal del Monte. The cultivated Cardinal, true discoverer of Caravaggio’s talent and ambassador of the Medici family in Rome, knew that the Duke would have particularly appreciated the ancient Ovidian subject. The myth of Perseus slaying the head of Medusa, the monstruous Gorgon with the power to turn humans into stone through eye contact, had been effectively incorporated (from Leonardo da Vinci to Benvenuto Cellini) into Florentine iconography. Medusa had become the subject of poets who made Caravaggio’s painting a true protagonist of the paragone debate, the discussion about the comparison among the arts. It was not the first time Caravaggio tried to show the superiority of painting over sculpture, especially in its evocative sisterhood with poetry. In this lecture we will not only explore the tradition, meaning, iconography and affectivity of Medusa, but we will also try to explore how Caravaggio could have technically painted the Gorgon with the help of a mirror. 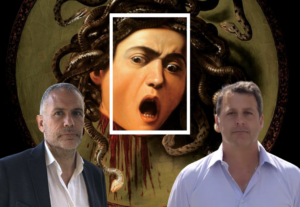 EXCLUSIVE WEBINAR | “Stick With Me, Baby, And You’ll Be Wearing Squirrel” Renaissance Art and the Advent of Abundance
Presented by Quentin Hardy
with Additional Commentary by Dr. Rocky Ruggiero

Join Quentin Hardy for a spirited discussion of the great hidden force of the Renaissance: The arrival of the Merchant class after the Black Death and their battle for prestige amid the incumbent powers. With the Church condemning bankers to Hell (unless you’d like to buy this nice chapel) and the courts passing laws about the kind of clothes mere rich people could and couldn’t wear, the upstart powers of commerce and finance fought back with unparalleled cleverness, celebrating themselves with astonishing innovation, thanks to the artists they hired. The result was a new culture of luxury, status objects, and even Christian iconography, influencing everything from the Age of Discovery to today’s billionaires launching themselves into space and sleeping on $400,000 mattresses.

Quentin Hardy, the head of editorial at Google, spent several decades covering technology, finance, and the habits of the very rich for The Wall Street Journal, Forbes, and The New York Times. His previous talks have covered the Renaissance technology revolution in print, and the Renaissance rise of the artist as celebrity. 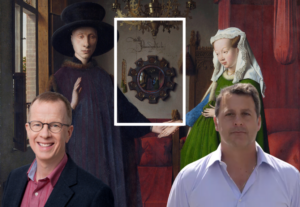 Join this exclusive webinar to think outside the box about Leonardo da Vinci’s creativity. Open your mind to considering such unsettling questions as: What if Leonardo wasn’t as original as we usually think he was? What if he learned more from his predecessors and contemporaries than we thought? What if he didn’t even apprentice with Andrea del Verrocchio but was hired as an assistant with skills already honed in a rival workshop? What if we dispense with all the legends and simply look at what Leonardo’s earliest paintings, drawings, and scant written documentation allow us to imagine are the true origins of his genius?

Gary M. Radke is Professor Emeritus of Art History at Syracuse University, where he directed the Florence Graduate Program in Renaissance Art and was named Meredith Professor for Teaching Excellence. His publications on Italian medieval and Renaissance art range from a book on the thirteenth-century papal palace in Viterbo to essays on the patronage of nuns in Renaissance Venice. He curated major loan exhibitions throughout the United States on Italian Renaissance sculptors Lorenzo Ghiberti, Luca della Robbia, Andrea del Verrocchio, Michelangelo, and Leonardo da Vinci. His widely distributed college textbook on Italian Renaissance art, co-authored with John Paoletti, appeared in four editions and in Spanish and Chinese translations. Gary is past president of the Italian Art Society and a fellow of the American Academy in Rome. 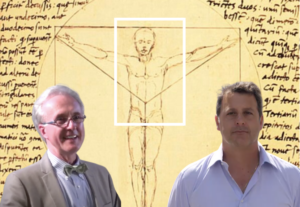