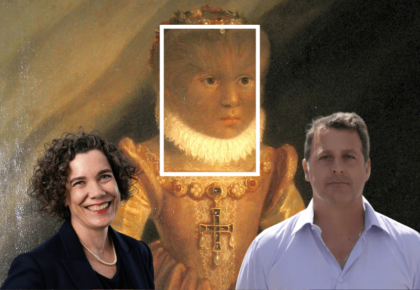 During the Renaissance, disabilities or genetic differences could be classified as monstrous, marvellous, or a combination of both. Dwarfs, such as the famous Morgante, worked at ducal courts as buffoons and servants. The “marvellous hairy girls” of the Gonzales family, whose father Petrus passed on hypertrichosis universalis, were recorded in a book of historic monsters by Ulisse Aldrovandi and their portraits painted by Lavinia Fontana.

In this talk, we’ll examine the implications on the lives of some of the people classified as marvellous monsters. We’ll also discuss how women were seen as carrying responsibility for the child’s appearance. When unusual births occurred, they were believed to have resulted from shocks to pregnant women or as punishment for irreligious behaviour. Some, such as the Monster of Ravenna, could also be seen of portents of upcoming danger, war, or religious strife.

Dr. Meghan Callahan has lived and worked in London since 2006. Like Rocky, she earned her Master’s degree in Art History from Syracuse University as a Florence Fellow. She has a Ph.D. in Art History from Rutgers University. Meghan is the Assistant Director for Teaching and Learning at Syracuse University London, where she has taught art history and history classes on Italian Art in London and the UK; Women and Art: London and UK; and Underground London.

She worked on the reinstallation of the Medieval and Renaissance Galleries at the Victoria and Albert Museum, and then with the sculpture dealer Patricia Wengraf. Meghan has published various articles and essays on the architectural patronage of the 16th-century mystic nun Sister Domenica da Paradiso, miraculous paintings in Renaissance Florence, and Italian Renaissance and Baroque sculpture.