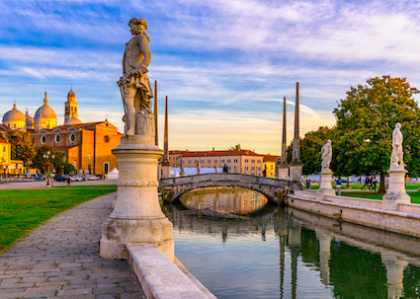 Course Description:
This course examines the art and architecture of Northern Italy during the late Middle Ages and Renaissance. Although Florence and Rome are usually considered to be the centers of Renaissance art, many cities north of the Apennines were also centers of extraordinary artistic production. Many believe that this was the result of an artistic “contamination,” as many of Florence’s greatest artists, such as Giotto, Donatello, Alberti and Leonardo da Vinci, traveled to northern cities, exposing them to the ideas and movements of the Renaissance.  Cities such as Parma would instead produce their own local geniuses such as Correggio and Parmigianino, whose work would rival that of any central Italian master. Regardless of the reason, by the end of the 15th century, much of Italy’s greatest art was being produced in cities that are better known today for their industry or culinary traditions. By examining this art and history firsthand, we define the meaning of the Renaissance in Northern Italy.

– LECTURE 1 – THE SCROVEGNI CHAPEL PART I

Giotto’s 14th-century fresco cycle in the Scrovegni Chapel in Padua, Italy, is perhaps the seminal motion picture in Western Art. The artist transformed the iconic, sacred subjects of his contemporary painting world into a very human story- or what I like to call the “visual vernacular.” This lecture examines a surprisingly modern aspect of Giotto’s work, that is the cinematic quality, and focusing specifically on the history and patronage of the chapel, as well as the scenes depicting the “Life of the Virgin Mary.” 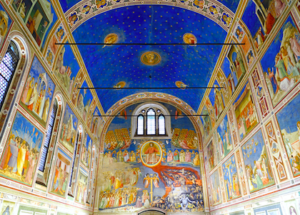 This second part of the lecture focuses on Giotto’s mise-en-scène, which is full of expressive character types, landscapes, color, and visual arrangements, specifically in the “Life and Passion of Jesus Christ” cycles. The sequential arrangement and juxtaposition of scenes, instead, produce a visual narrative of which most modern film directors would be envious. In a purely visual medium, Giotto is able to evoke sounds and smells, emotions and expectations, humor and terror. 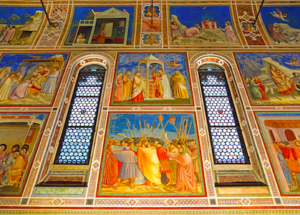 In 1455, the great Florentine sculptor, Donatello, also went to Padua in order to create a large, bronze equestrian monument to the mercenary general Erasmo dei Narni, better known as “Gattamelata.” Donatello’s sculpture was the first equestrian monument since Roman times, and still stands today outside of the Santo, which is the nickname for the Basilica of St. Anthony in Padua.  Donatello was then commissioned by the friars of the church to produce a series of bronze sculptures to decorate the high altar of their church.  These often-overlooked sculptures are not only some of Donatello’s finest, but are also some of the most influential pieces of the Renaissance. 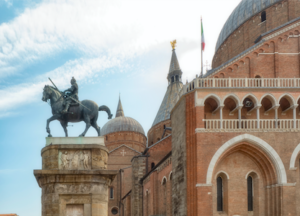 The Camera degli Sposi (1465-1474) is perhaps Andrea Mantegna’s most famous work.  Decorating the reception room of the Marquis of Mantua, Ludovico II Gonzaga, Mantegna created an incredibly vivid “picture” of life at a Renaissance court.  In addition to the various portraits of the royal family that Mantegna included in his fresco, he also captured the less noble elements of court life such as the dwarves/jesters and actual portraits of the royal dogs.  This lecture also examines the Basilica of Sant’ Andrea, which was designed by the great Florentine architect, Leon Battista Alberti, and is the first great Renaissance-style church in northern Italy.  Its façade best embodies the return to classical architectural philosophy that characterized the Renaissance. Sant’Andrea is also celebrated for housing one of Christianity’s greatest relics- the blood of Christ brought to Italy by St. Longinus himself. 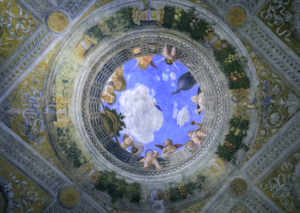 – LECTURE 5 – LEONARDO AT THE COURT OF LUDOVICO SFORZA

Seeking to soften the militant and belligerent reputation of the Lombard capital city, Duke Ludovico “the Moor” Sforza sought the services of an extraordinary artist and inventor from Florence by the name of Leonardo da Vinci.   The artist’s arrival in Milan in 1481 marked a turning point in Milan’s history, introducing the Renaissance to the great northern city. The 18 years that Leonardo spent in Milan were some of his most productive, and this lecture examines those works produced while Leonardo was in Milan including the Virgin of the Rocks, the Vitruvian Man, the Lady with an Ermine, and, of course, the Last Supper. 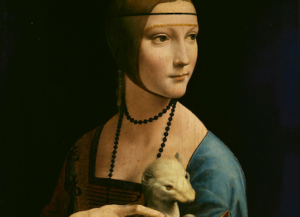 The Camera di San Paolo (1519) was Correggio’s first major commission in Parma. In the private quarters of a Benedictine abbess named Giovanna Piacenza, he executed a decorative fresco program filled with mythological and festive motifs. The particularly beautiful illusionistic ceiling decoration was a sort of a warm-up for the stunning domes he would paint in the following years. The Pinacoteca of Parma contains an amazing collection of works by Correggio, as well as Parmigianino’s celebrated Turkish Slave and one of Leonardo’s most beautiful female figures, known as La Scapiliata. 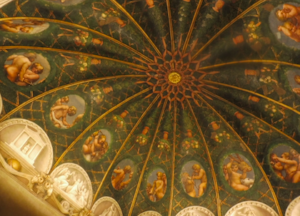 WEEK 4 – CORREGGIO IN PARMA AND GUILIO ROMANO IN MANTUA

Correggio’s first great dome painting (1520) was for the Benedictine church of San Giovanni Evangelista.  Here he painted an ambiguous subject of Jesus flying through the air in a daring sotto in sù perspective, surrounded by the twelve apostles. One of the apostles was intentionally hidden from the view of the public, and only visible to the celebrating clergy. Correggio’s other breath-taking dome fresco is the Assumption of the Virgin (1526) in the dome of Parma cathedral. Gigantic painted figures of the apostles stand below an explosion of heavenly clouds and hundreds of angels that create a kind of celestial architecture upon which the Virgin Mary is assumed into heaven.  The dramatic energy of the painting is a clear harbinger of the great Baroque paintings of the following century. 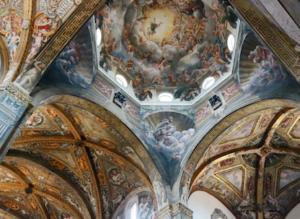 The Palazzo Te (1526-1535) was both designed and decorated by the great Mannerist artist and pupil of Raphael, Giulio Romano.  Built as the new royal residence of the Marquis turned Duke of Mantua, Federico II Gonzaga, every detail of the building was intended to delight the visitor.  From the Sala dei Cavalli where the Gonzaga would banquet surrounded by actual portraits of their prize-winning horses, to the extraordinarily erotic paintings in the Sala of Psyche, and finally, to the staggering Sala dei Giganti, with its colossal-scale figures who create a veritable sense of virtual reality, the Palazzo Te is one of the world’s most unique and beautiful buildings. 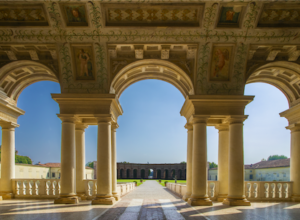 WEEK 5: VENICE: THE MOST SERENE REPUBLIC

– LECTURE 9 – THE CITY ON THE SEA: VENETIAN HISTORY, THE BASILICA OF SAN MARCO AND THE DOGE’S PALACE

Venice was the longest-lasting Republic in history. The city’s privileged position as cultural and economic bridge between the Eastern and Western Christian world contribute to the uniqueness of Venice. The art and architecture in Venice clearly reflect this combination of Islamic, Byzantine, and Classical influences. The Basilica of San Marco is Venice’s most important church and was originally constructed in the 9th century CE to house the mortal remains of St. Mark the Evangelist. The style of the church is the perfect marriage of eastern and western Christian architecture, showcasing the world’s most extensive and beautiful program of mosaic decoration. The Doge’s Palace, instead, was the seat of the great republic’s political power and the former residence of the rulers of Venice, known as the Doge. 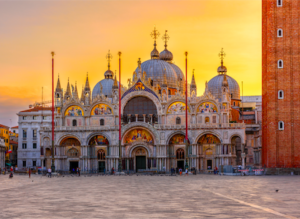 The Gallerie dell’Accademia houses the largest and most impressive collection of Venetian paintings in the world. Founded in 1750, the gallery occupies three buildings that were originally a church, monastery and scuola. Amongst the museum’s most treasured works are the Tempest by Giorgione, the cycle of the Legend of St. Ursula by Carpaccio the Miracle of the Slave by Tintoretto, the Feast in the House of Levi by Veronese, and the Pietà, which was Titian’s last work. 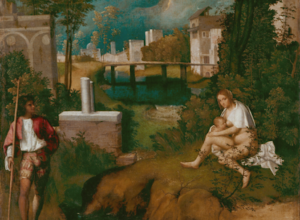 This lecture analyzes the Scuola Grande di San Rocco, which is often described as the “Sistine Chapel of Venice.” Decorated entirely with paintings by the great Venetian painter Tintoretto, it is the only still-active scuola in the city and continues to represent one of Venice’s most important religious and social traditions. Tintoretto’s epic painting program was executed over a 23-year period and produced some of the powerful and theatrical paintings in history, characterized by a dramatic use of chiaroscuro and non-conventional compositions. 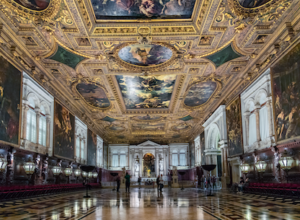 This lecture examines the extraordinary collection of paintings in the Brera Gallery, which includes works by the Bellini brothers, Tintoretto, Raphael, Piero della Francesca and Caravaggio. We shall also examine the so-called Rondanini Pietà, which was Michelangelo’s last sculpture. Intended to serve as his own funerary monument, the artist worked on the piece over the last decade of his life. Tragic and frail in appearance, the sculpture is often interpreted as reflecting the fragile state of mind of an extraordinary artist in the twilight of his life. 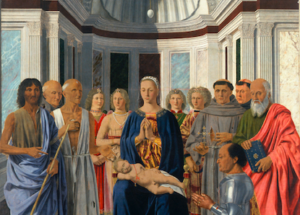