The Divine Michelangelo: His Life and His Works 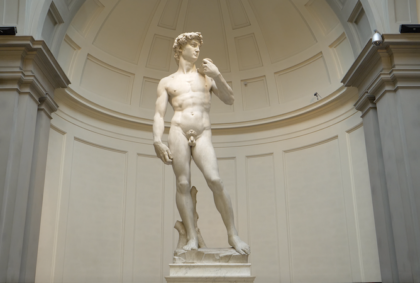 ONLINE ART HISTORY COURSE
“The Divine Michelangelo: His Life and His Works”

Course Description:
Michelangelo Buonarroti’s artistic career spanned more than seven decades, during which he produced some of the most extraordinary works of art in history. Dividing his time between his native city of Florence and his adopted city of Rome, the “Divine Michelangelo,” as he was known, was the first true master of the major artistic disciplines of sculpture, painting, and architecture. This course examines his epic life using milestone works of art and architecture to illustrate the chapters of his artistic biography.

Michelangelo began his artistic career at the age of 13 in the workshop of the Florentine painter Domenico Ghirlandaio. After only a single year, his talents captured the attention of Lorenzo il Magnifico De’Medici who invited the young artist to join his sculpture school and also his household. After the death of Lorenzo, Michelangelo traveled to Rome to make a name for himself. 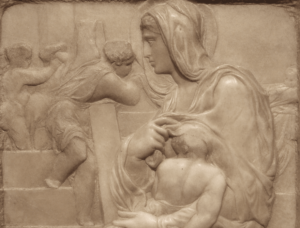 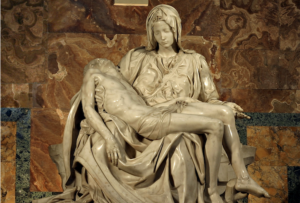 When Michelangelo returned to Florence, he was already a celebrity. If the Pietà was Michelangelo’s first “number one hit”, few could have imagined that his next work of sculpture would overshadow it. In fact, the David would arguably overshadow every other sculpture in history! But almost as soon as he finished carving the giant statue, Michelangelo was asked to test his genius against Leonardo Da Vinci as each was asked to paint a giant battle mural in the great hall of Palazzo Vecchio. 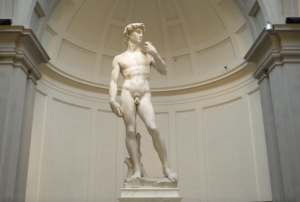 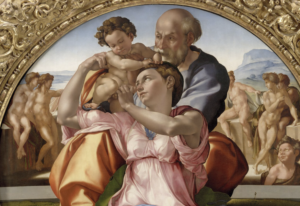 Michelangelo left for Rome again in 1506 to execute the “mother of all tombs” for Pope Julius II. Nearly 40ft. tall, the tomb would have contained some 40 over-life-sized statues. After ordering 100 tons of marble to be shipped to Rome, Pope Julius changed his mind and put Michelangelo to work on painting the nearly 10,000ft2 the Sistine Chapel ceiling, which would occupy the next 4 ½ years of his life.

– LECTURE 5: THE TRAGEDY OF THE TOMB 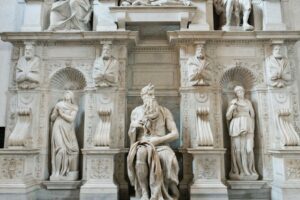 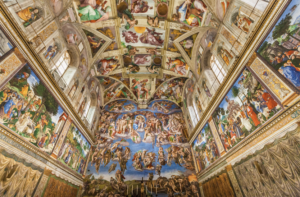 THEME 4 – MICHELANGELO AND THE MEDICI POPES

After finishing the Sistine ceiling and finally making some progress on the tomb of the now deceased Pope Julius II, Michelangelo would again abandon the tomb to work for two of his childhood friends from the Medici household who had gone on to become Popes Leo X and Clement VII. Both Popes would employ Michelangelo on various projects in Florence such as the façade of San Lorenzo, the New Sacristy, and the Laurentian Library. 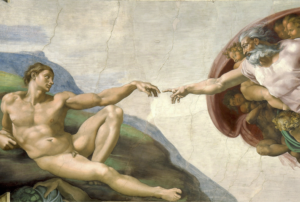 – LECTURE 8: THE MEDICI POPES IN FLORENCE – PART I 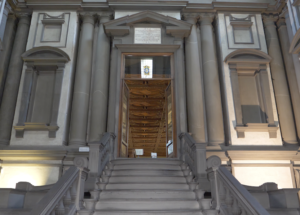 THEME 5 – MICHELANGELO AND THE MEDICI POPES

24 years after completing the ceiling, Michelangelo returned to the Sistine Chapel to paint its altar wall. His gigantic Last Judgement took five years to complete and scandalized Rome as many of its holy characters were depicted in the nude.

– LECTURE 9: THE NEW SACRISTY AND THE LAURENTIAN LIBRARY 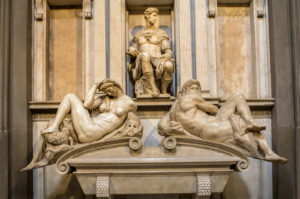 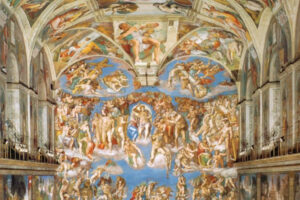 THEME 6: RETURN TO THE SISTINE CHAPEL

Twenty-four years after completing the ceiling, Michelangelo returned to the Sistine Chapel to paint its altar wall. His gigantic Last Judgement took five years to complete and scandalized Rome as many of its holy characters 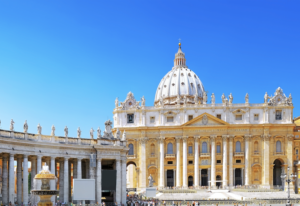 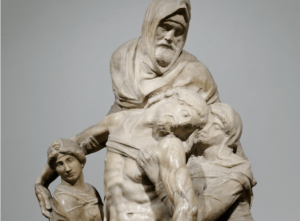 ONLINE ART HISTORY COURSE | “The Divine Michelangelo: His Life and His Works” RECORDED