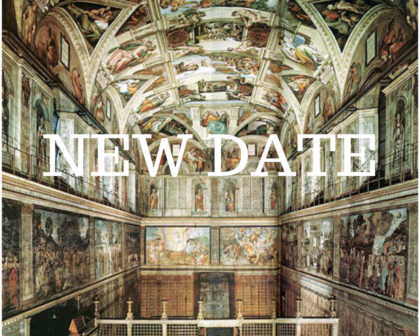 When Michelangelo signed the contract with Pope Julius II in 1508 to paint the Sistine Chapel ceiling, little did he know the turmoil that awaited him. Never before had such a large-scale painting been attempted on a ceiling—and by a sculptor no less. Rocky Ruggiero, a specialist in the Early Renaissance, examines the artistic importance of the ceiling and the human drama behind its creation, as well as the chapel’s history and its exquisite art produced before Michelangelo.

When Michelangelo was called to Rome in 1506 by the recently elected Pope Julius II, it was to design and carve the most colossal of all tombs—for himself. Intended to stand four stories in height directly over the tomb of St. Peter, it was to feature 40 larger-than-life statues and was a reflection of both the pope’s expansive spiritual and political power and the artist’s ambition. Shortly after ordering 100 tons of Carrara marble with which to begin the project, Julius put the commission on hold so that Michelangelo could instead cover the ceiling of the Sistine Chapel in fresco.

Decades before Michelangelo climbed nearly 70 feet of scaffolding to adorn the ceiling of the Sistine Chapel, a galaxy of late-15th- century painters had already decorated its walls. Artists including Sandro Botticelli, Domenico Ghirlandaio, Pietro Perugino, and Luca Signorelli were sent to Rome by Lorenzo “il Magnifico” de’ Medici to pay homage to the original patron and namesake of the chapel, Pope Sixtus IV. Although often overshadowed by the genius of Michelangelo, these Early Renaissance frescoes had already transformed the chapel into an extraordinary decorative complex.

After 4 1/2 years of physical strain, personal conflict with the pope, and an endless search for inspiration, Michelangelo covered nearly 9,000 square feet of ceiling with some of the most beautiful and sublime figures in artistic history.

On the ceiling of the Sistine Chapel, Michelangelo introduced his epic vision of the Old Testament as expressed through his radical interpretations of traditional subject matter and through his celebration of the male nude form.

Ruggiero, who divides his time between Italy and the United States, has lectured on Italian art and architecture for American university programs in Italy for the past 20 years, including those of Syracuse, Kent State, Vanderbilt, and Boston College.