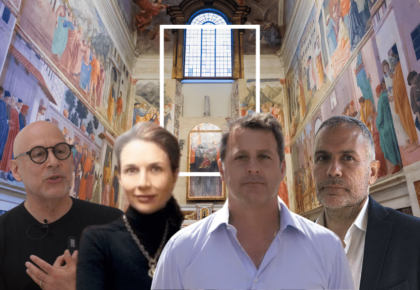 On September 16 in the year 1098, Mechthild of Merxheim was delivered of her 10th child. As was the custom, the little girl was given to the Church at the age of eight as an “oblate”, destined to become a nun and  live a life of service to God. Thus began the saga of one of the most famous and fascinating women in Church history, Hildegard von Bingen.

Hildegard was one of a number of medieval women visionaries and mystics, women who received visions they believed came directly from God. Her recounting of them left us with three extraordinary, illuminated manuscripts known as the Scivias (The Way), the Liber Vitae Meritorum (the Book of Life’s Merits), and the Liber Divinorum Operum (the Book of Divine Works). But Hildegard was far more than just another mystic. She was a composer of exquisite music set for both instruments and voice. She was a preacher and traveled throughout the Rhineland even meeting with the Holy Roman Emperor Friedrich I Barbarossa whom she chastised or his lack of sufficient piety. She was a natural historian, a biologist, botanist, geologist, and also a healer. Hildegard wrote two books on physiology and medicine, the Causae et Curae and the Physica, leaving us with profound insights into the medieval understanding of the human body and medicine.

Hildegard’s work soon began to appear outside of Germany and by the year she died, a contemporaneous copy of the Liber Divinorum Operum arrived in Lucca and is now in the Biblioteca Statale. Scholars have suggested that the frescoes on the Camposanto Monumentale in Pisa (painted in 1391) share features with the illuminations of Hildegard’s visionary works as do some of the motifs on the baptismal font in the Basilica di San Frediano in Lucca. It has even been suggested that Hubert and Jan van Ecyk were deeply influenced by her Scivias in their painting of the Ghent Altarpiece.

Join physiologist and medical historian, Dr. Jeremy Wasser, on a trip back in time to medieval Bingen. Get to know the “Sibyl of the Rhine”, Hildegard von Bingen, saint, and Doctor of the Church. We will also look at what we know of Hildegard’s personal medical history along with that of several other medieval mystics and visionaries. Come along as we trace Hildegard’s influence in theology, music, science, and medicine from Germany to Italy and beyond. 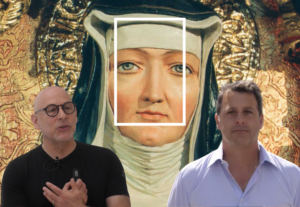 The house of Temple St. Clair was founded in Florence in 1986.

From the beginning, a distinct vocabulary of design emerged.

35 years later, we are gathering and uniting the most signature jewels of our world into a collection of House Jewels referred to as Florence86.

In this exclusive webinar, Temple will share the story of her discovery of the world of the Florentine artigiani some 36 years ago, and how it inspired her to found her jewelry brand. 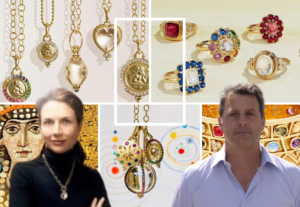 Through the patronage of Pope Urban VIII Barberini (1623-1644), Innocent X Pamphili (1644-1655), Alexander VII Chigi (1655-1667) and Clement IX Rospigliosi (1667-1669), Gian Lorenzo Bernini had created one of the biggest artistic workshops in the history of Rome. It must have been a true industry which could melt and cast tons of bronze taken from the Pantheon and transport and carve the enormous amount of travertine stone coming from the quarries of Tivoli. A myriad of talented artists and assistants were engaged for the purpose of decorating the recently completed Basilica of Saint Peter, the biggest church in Christendom.

This lecture will investigate the execution of the Baldaquin which signals the Tomb of the Apostle Peter, the Crossing with the giant piers dedicated to Veronica, Andrew, Longinus and Helen, the Cathedra Petri (Throne of Peter), Piazza San Pietro, and the Bridge of Castel Sant’Angelo. These different commissions, completed in about 40 years, are connected and aligned by an incredible sense of unity along a path which from the Bridge, access to the citadel of the Vatican, to the Throne, symbol of the end of time and final Judgement, is ushered by the presence of angels in crescendo as if the visitor (ideally a pilgrim in Baroque Rome) was invited to experience an elevated realm with eucharistic and eschatological meanings. The whole path was activated when the pope celebrated mass on the main altar, a sort of theatrum sacrum (sacred theatre) which irradiated from the Tomb of the Apostle throughout the city and the world. 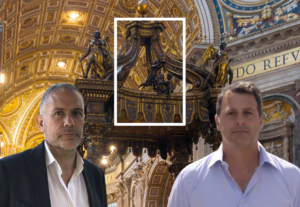 Join Dr. Rocky for this exclusive webinar in honor of the current restoration of the marvelous frescoes in the Brancacci Chapel in Florence, Italy. There is no better place in the world in which to illustrate the evolution of late Gothic to Early Renaissance painting than this chapel. It was here that the young genius named Masaccio introduced what today we define as Renaissance painting and inspired later artists such as Leonardo da Vinci, Michelangelo and Caravaggio. 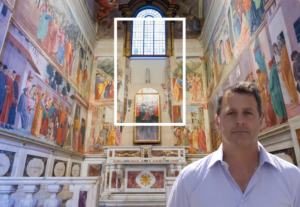