Leonardo da Vinci’s Last Supper is one of the world’s most famous works of art. Painted in 1495 on a wall of the refectory of a Dominican convent in Milan, Italy, the Last Supper is celebrated as the first work of the High Renaissance. But few people realize that Leonardo’s painting of the subject was the culmination of nearly 1,000 years of iconographic tradition; and that his depiction of Jesus and twelve (soon to be eleven) of his closest followers sharing their last meal together was one of dozens of Last Supper paintings to adorn refectory – or “dining hall” – walls in Italy. This webinar presentation will explore the evolution of the subject of the Last Supper in Italian art, beginning with Early Christian images through to the late Renaissance. For over 700 years, Dante’s poetic and moral imagination has inspired generations of readers, artists, writers, and more. This webinar will introduce participants to Dante’s life and will help you to discover what about the Divine Comedy, in particular, makes it a perennially relevant masterpiece of world literature. Intimidating to many; impenetrable to some, the Divine Comedy has quite a reputation, but with Kristin as your guide, you will gain a deeper understanding of and appreciation for Dante’s remarkable genius by contextualizing his ideas on love, politics, tyranny, and redemption. We will also answer some enduring questions like: why has Hell frozen over?; is having sex a sin?; what does the Devil look like?; are the worst part of the Inferno really for the morally neutral? We will also be sure to do a close reading of the first part of Canto I, Inferno so that you can come away from this discussion quoting from the most famous lines in Italian literary history WITH a real understanding of their true meaning!

Kristin Stasiowski, Ph.D is the Assistant Dean of International Programs and Education Abroad for the College of Arts and Sciences and is also an Assistant Professor of Italian Language and Literature in the Department of Modern and Classical Languages at Kent State University. She received her Ph.D from Yale University in Italian Language and Literature and has taught Italian language, literature, cinema, history and culture in both Florence, Italy and at Kent State. She recently published a chapter entitled A Divine Comedy for All Time: Dante’s Enduring Relevance for the Contemporary Reader in Italian Pop Culture: Media, Product, Imageries. Rome, Italy: Viella Editrice s.r.. Her current research is focused on Dante, Boccaccio, and the modern poet Clemente Rebora. 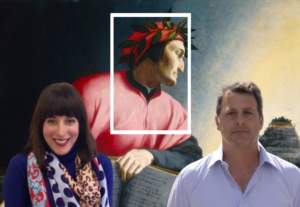 Mention of Renaissance Florence tends to make us think of beautiful frescoes and altarpieces, of snow-white marble statues and Brunelleschi’s dome rising above the city’s cathedral. But Renaissance Florence had other heroes, too: manuscript hunters, teachers, scribes, scholars, librarians, and book collectors. What all of these bookworms had in common was “the king of the world’s booksellers,” Vespasiano da Bisticci. In this illustrated lecture, based on his latest book, The Bookseller of Florence, Ross King will introduce Vespasiano. For fifty years, from the 1430s to the 1480s, he ran a bookstore beside the Bargello, producing hundreds of beautiful illuminated manuscripts for clients such as the Medici and the popes, and penning a gossipy memoir that offers unparalleled insights into Florence’s “golden age.” 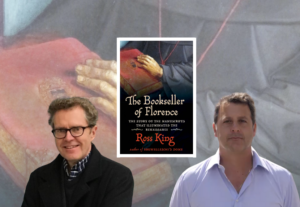 The extraordinary art collection of Cardinal Scipione Borghese (1577-1633), housed in the famous Villa Borghese in Rome, was assembled and commissioned according to the concept of paragone. Based on the famous simile by poet Horace ut pictura poesis (painting is like poetry) in antiquity and theorized by Leonardo in the Renaissance, the paragone was a debate among poets, artists and patrons on the comparison of the arts. Essentially, Leonardo opened a complex reflection on the relationship between the arts and the senses in which Ovidian myths offered the metaphoric context for sophisticated discussions about painting and the sense of sight, sculpture and the sense of touch, poetry and the sense of hearing. Which medium could actually evoke the synesthetic realm and reach supremacy in the sophisticated intellectual world of Baroque Rome? With the sculptural groups of the Abduction of Persephone (c. 1622) and Apollo and Daphne (c. 1625), Gian Lorenzo Bernini entered into the debate by visually asserting that sculpture exhibited qualities which made it superior to all the other media. This lecture explores the way Bernini competed with ancient and modern sculptors (from Praxiteles to Michelangelo and Gianbologna) but also with poets (from Ovid to Petrarch and Marino) transforming a block of Carrara marble into an evocative poem.

Paolo Alei is an art historian from Rome. He is Professor of art history at the University of California (the UCEAP academic program in Italy) and Curator of the Museum of the Castle of Bracciano near Rome. He has a Master from Columbia University where he specialized on Venetian Renaissance Painting and a PhD from Oxford University where he completed a dissertation on the influence of the Natural History by Pliny the Elder on Italian Renaissance art. He has published several essays on Raphael, Titian, Caravaggio, and a book on the history of the Venice Carnival. Recently, he coedited a monumental book about the patronage of the Orsini family in Central Italy. He is co-organizer of EMR (Early Modern Rome), one of the greatest conferences about Renaissance and Baroque culture in the world. Next appointment will be in November with more than 150 scholars. He is part of the organization of the Carnival of Venice, and he is currently completing an exhibition in the Castle of Bracciano with the Orpheon Foundation about art and music. There will be about 200 musical instruments perfectly functioning from 1550 to 1700. After having lived in Rome, San Francisco, New York, London, Istanbul and Venice, his next project is to go and live in Naples and study Renaissance art under the Spanish kings. 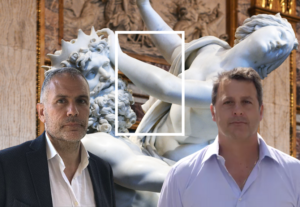 Join Chef Matteo in this live cooking class directly from his cucina (kitchen) in Florence, Italy. In this exclusive webinar, Chef Matteo will show us how to prepare two timeless Italian seafood recipes – Spaghetti alle Vongole (Spaghetti with Clams) and Insalata Tiepida di Polpo (Lukewarm Octopus Salad) – with his usual signature twist. Recipes will be provided in advance of live cooking class event.

World-renowned chef Matteo Boglione was born in Italy. In 2010, he opened the critically acclaimed restaurant in New York City called “Il Matto.” In 2013, Matteo became the Executive Chef at Le Cirque in New York City, and then later at Le Cirque Signature in Mumbai and Bangalore. He later returned to his hometown of Florence, Italy, where he most recently began a collaboration with the celebrity poet-butcher Dario Cecchini.

The webinar will include a 90-minute cooking demonstration followed by Q&A. 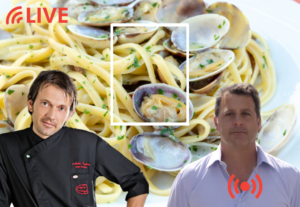